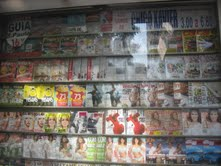 In this three part series of essays I will consider some of the aspects of race and visuality in Brazil. This article will lay out the dominant ways in which Afro-Brazilians are represented in the public sphere and describe the racial logics that sustain these images. The next two articles will probe the domestic and international incursions into the racial visual field. 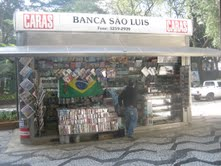 On one of my meetings with Renato Ribeiro1, an Afro-Brazilian media worker, we walked along the crowded streets of São Paulo en route to eat lunch and talk about his experience working in mainstream and alternative black media. I jogged beside him in order to keep up with his short, brusque strides, and listened to him tell me about the hegemony of whiteness in the national media. He suddenly stopped in front of one of the bancos das revistas or magazine stands that punctuate the city’s sidewalks and illustrated his point by gesturing towards the covers facing us and saying, “look at the capas (covers) of the magazines facing us. They are all white people…of course except for Revista Raça (Race Magazine).” Race Magazine is Brazil’s only national magazine that represents Afro-Brazilians and a quick scan of the magazine’s stand’s content proved his point. In recognizing the magazine stands as visual sites of racial representations, Renato also drew attention to the ways in which visual culture is embedded within the landscape of the city and the racial implications of its depictions.

That someone would point out the dominance of whiteness in the media is not new. What is different is the national context of Brazil and the racial ideologies that underpin the forms that some representations take. Although becoming increasingly more common, racial critiques of the media and other areas of power have largely been silenced or ignored by the belief in racial democracy that many Brazilians sustain. The idea of racial democracy in Brazil ascribes the origins of the national population to mixture between Portuguese, African, and Indigenous peoples. It is commonly thought that this mixture blurred the boundaries between distinct racial groups and thus acts as a barrier against racism or racial prejudice. Although scholars have documented the ways in which racism continues to marginalize Afro-Brazilian access to economic, political, and social power, general ideas about racial democracy continue to underwrite a pervasive silence around discussing race or racial inequality among the general Brazilian populace. Thus when Renato levies a racial critique of the magazine stand’s visual contents, he articulates a view often unheard among many segments of the population.

The Brazilian government has taken steps to remedy racial inequality by passing legislation meant to facilitate Afro-Brazilian access to education. For example, many Brazilian universities have instituted affirmative action programs to increase the number of Afro-Brazilian and poor students in higher education. These programs have been controversial and subject to much outcry and scrutiny. However, they represent a radical step towards racial equality in a country where many people are unaccustomed to discussing race publicly. While progress is being made for racial integration in some areas, the national media has remained fairly static in its depictions of Afro-Brazilian people. 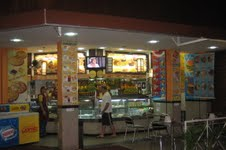 Television in a café open to the street 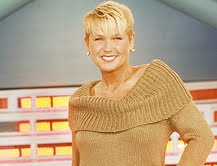 Whiteness as a beauty ideal presents itself on television through the conspicuous absence of Afro-Brazilians on many programs. Joel Zito Araújo, author of the book Denying Brazil and a documentary film by the same name, has systematically tracked the ways in which Afro-Brazilians are and are not represented on television. Araújo found that on a talk show on channel TV Nacional 95 out of 105 guests were white (90.4%). A figure like Xuxa is an iconic example of how whiteness comes to be privileged on Brazilian television. Xuxa, a blonde woman of German descent, hosts a popular children’s television show called TV Xuxa and has gained incredible visibility in public life. Amelia Simpson claims that, “Xuxa’s promotion of a white ideal invests the old message of superiority of whiteness with extraordinary power in the age of mass media.”2 Brazil is said to have the largest black population outside of Africa, which makes the general absence of Afro-Brazilians on television and in print media even more conspicuous. 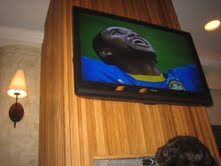 When Afro-Brazilians do appear in visual media they are presented mainly through static and stereotypical images of athletes, service workers, and slum dwellers. Novelas or soap operas are one of the most popular forms of televisual entertainment. They air in the evenings and, unlike U.S. American soap operas, end after 6 to 8 months. When novelas are set before abolition of slavery they will feature large numbers of Afro-Brazilians as enslaved men and women. Afro-Brazilian men and boys make patterned appearances in visual culture as soccer players. These images are amplified during the world cup in advertisements and on television.

Black women tend to appear in images that objectify them by implying their sexual availability through their nakedness or their perceived willingness to undress. In 2011 the Devassa Beer company released an advertisement for their dark beer that depicted a black woman with high heels, thigh high stockings, and a barely there dress. The text says, “It is by the body that you recognize the true black (woman): Devassa full bodied beer in the style of dark ale with high fermentation, creamy, and with roasted malt aroma.” The ad draws an association between dark beer and black women by using the term “negra” for both and depicting a black woman. It links the idea of the sexually available black woman to the desirability of the dark beer and claims that they are both recognizable by their bodies and offers them both up for consumption. Even if the advertiser meant for the ad to be intentionally provocative and politically incorrect, that they thought that this was appropriate to release for a national audience indicates the lack of fear of any outrage it could generate and anticipates the silence that surrounds race as a category of critique.

In this first essay I aimed to sketch out some of the contemporary conditions of the racialized visual landscape in Brazil where Afro-Brazilians appear mainly through static and stereotypical images, if they appear at all. Afro-Brazilian media producers, like Renato, and everyday people continually voiced their frustration with these racial “regimes of representation.”3 They claimed that these images expressed an enactment of power by circumscribing the place of Afro-Brazilians to a few defined and marginal roles. In the following essays I will examine the attempts to call attention to these representational inequalities. As for the Devassa beer ad, it did not go unchallenged. After its appearance I read numerous blog posts denouncing this depiction and saw an image circulating through social media venues. The image asked, “Do you want to collaborate with racism?, Continue drinking this beer.” The response clearly considers the original Devassa ad to be racist and claims that those who drink the beer are participating in racism. The image indicates that Devassa’s simplistic rendering of black women is a racist act and the bottom right inset portrays an image showing a multiplicity of black women in the variety of roles that they inhabit in everyday life. In so doing, the protest image resists the marginal image through which Afro-Brazilian women become present in the ad, by drawing attention to the numerous ways in which black women are more realistically present or how they ordinarily exist.