The sitcom The Goldbergs, which aired from 1949-1956, has been well represented in writings about early television. The show’s individual history exemplifies many significant moments in television history. It began as a radio show in 1929 and transitioned onto television twenty years later. As an ethnic comedy, The Goldbergs enjoyed immense popularity in the early 1950s, but struggled to remain relevant when the television landscape shifted to suburban sitcoms later that decade. The histories of individual cast members of the show also serve as compelling stories, as Gertrude Berg, the creator, writer, and star of The Goldbergs, achieved levels of popularity and power unknown to a woman at that time and her onscreen husband, Philip Loeb, was accused of communism during the red scare and blacklisted from television by the studios. The Goldbergs has been written about for all of these reasons and more—the influence of Jewish vaudeville, Berg’s integrated product sponsorship and postwar consumerism, etc.1

Despite its popularity when it aired and the considerable present-day reconsideration of the show, The Goldbergs had been largely unavailable to contemporary audiences until this year. The show’s final season, which was filmed on 35mm film and syndicated by Guild Films, was released on DVD in 2008; however, many of the earlier episodes, which were broadcast live and recorded as kinescopes, could not be seen anywhere. Unfortunately, many of these episodes no longer exist due to inadequate care. Kinescopes were created to accommodate national broadcasts of programs that were transmitted live from television networks’ East Coast studios. Broadcast video signals could only travel so far from their point of origin and recordable videotape simply did not exist. To overcome these limitations, 16mm cameras were set up in the studio that recorded the live video image off of a television monitor. These 16mm films were then shipped across the country to be aired for West Coast audiences at a later date. By the early 1950s, a new transcontinental cable could carry video signals across the country, but the use of kinescopes still remained a standard practice. Live broadcasts originating in the East were recorded by West Coast stations, which then rebroadcast the program three hours later to account for the time difference.

During the 1950s, these kinescopes were not seen as historical artifacts, but were primarily valued for their immediate use to the television networks. As objects considered to hold only temporary value, kinescopes were not properly stored and maintained, leaving many early television shows lost to us. Consequently, very few episodes from The Goldbergs‘ seven-year run exist. In the 1980s, Cherney Berg, Gertrude Berg’s son and frequent director of The Goldbergs, donated the thirty-nine 35mm episodes from final season of the show along with twenty-five kinescopes from earlier seasons to the UCLA Film & Television Archive. As the trustee of the largest known collection of The Goldbergs episodes, the Archive decided in 2008 to release all of their holdings on DVD and to collect other surviving episodes of the show. The resulting 6-disc DVD set, released in February, 2010, contains all of the 71 episodes of The Goldbergs known to still exist.

I served as the associate producer on the DVD release, and my duties included both the performing and oversight of the digital restoration process. I began work on the digital restoration in early 2009, spending hours watching and rewatching each episode to remove dirt, excess noise, and other “defects” from the image.2 The resulting “cleaned up” image increases the commercial appeal of the DVD box set for contemporary audiences. Yet, I worry about meeting the expectations of modern viewing audiences, viewers who might have wide screen, high definition TVs, who are used to watching programs with slick editing and high production values. To what standards should I “restore” a kinescope, when the information contained within the image in no way comes close to contemporary digital television resolution? In trying to conform to contemporary expectations, if I overwork the image, will audiences still understand what they are watching once the kinescope has been digitally restored and specific traits resulting from the recording process have been removed? 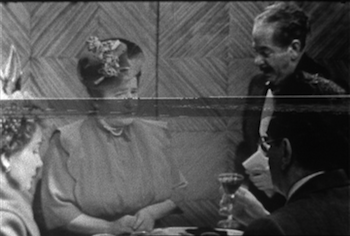 A brief interference in the video signal creates one frame of distortion.

The kinescope process resulted in a highly imperfect image. The intermediate step of filming off of a television doubled the chance of errors as not one, but two cameras could have focus, framing, and stability problems. Instead of trying to enhance the image to current standards, I use the digital restoration tools to cover up the effects of time, wanting to create what I consider a “watchable” image, one in which the age of the film will not distract from their enjoyment of the show itself. To create this “watchable” image, I digitally remove the dirt and dust locked in the image and the tears and splices of the film. I also soften the presence of image noise and film grain.

A “Before & After” video, courtesy of
http://www.cinema.ucla.edu/goldbergs/beforeandafter.html

As it turns out, film grain is all-important to many people. When speaking about my digital restoration work, it is often the first thing I am asked about by people in archival and media studies circles wanting to know how much film grain I remove. I know the question is loaded, and that they ask me with a degree of suspicion, fearing that today’s digital media landscape threatens to obscure filmic specificity. I admit to removing some, but not all, of the grain from an image.3

I am often surprised however, that despite people’s intense concern for the state of film grain, they so quickly dismiss other qualities inherent to kinescopes. No one has ever expressed concern over the potential removal of scan lines recorded off the television monitor that are present in many kinescopes. I have experienced many instances while those observing my work have asked, “Can’t you get rid of that?” while pointing to some remnant of the kinescope process, a brief reflection of light off of the television screen that the 16mm camera was recording or a distortion in the video signal. While I theoretically could erase these technical flaws, I more often than not do not alter them. In fact, over the three years I have been doing digital restoration on kinescopes, I find myself doing less and less to the image, instead attempting to balance the idea of a “watchable” image with one that preserves the peculiarities of the medium. For instance, I could easily replace the flickering frames that result from a change in the video feed. Filling these imperfect frames in with black frames would create a clean cut, yet would obscure the technical processes involved in creating early television. Perhaps this goes against the expectations of what a digitally restored image should look like, as I choose not take full advantage of what the restoration software allows. Yet, just as there was no opportunity to reshoot a scene if an actor stumbled over his or her lines during these live broadcasts, there was no chance to fix a film camera that was inadvertently misaligned with the television screen resulting in a significantly warped image. Therefore, despite the capabilities of modern digital restoration tools, correcting the imperfect image would result in obscuring one of early television’s most important qualities, its liveness. Instead, the weird and unexpected visual effects present in a kinescope reveal the jerry-rigged, haphazard nature of filming early television. These flaws create an endearing effect for me, revealing how despite logistical and technical limitations, the television industry forged ahead with this experimental medium. 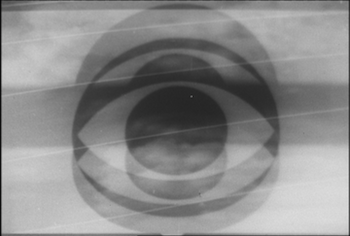 The CBS logo flickers onto screen at the end of a show resulting from a change in the video feed.

Therefore during the digital restoration process, I am above all concerned with preserving the effects inherent to the kinescope process. True, the 16mm image, complete with film grain, is all we have left of the original event. However, at the time of the original broadcast, East Coast viewers never even saw this film. They viewed the video signal directly. Other viewers across the country saw the 16mm film, but re-broadcast via video, at varying signal strengths, resulting in varying image resolutions. They might not all have seen film grain, but the did all see the mistakes and flaws contained within the technical process of filming early television live. Preserving and presenting The Goldbergs to contemporary audiences should not only involve consideration for the preservation of the filmic artifact. More importantly, we should focus on what makes a kinescope unique—distorted reflections found in the image, a piece of dirt left on the television screen, a sudden dropout in the video signal. Overlooking these qualities obscures the historical importance of early television technology, as kinescopes remain as a record of the technological possibilities of early 1950s television. In finding a balance between contemporary viewers’ expectations and viewing capabilities and what is recorded on a kinescope, we should be careful not to value our current technological potential to digitally manipulate the footage over its historical origins. This includes both the film and video specificity of the medium.