Forget everything you’ve ever heard about rapacious corporations that lay waste to the land and foul the waters. Those were corporations of the twentieth century, an unfortunate age of extraction and exploitation when the febrile embrace of industry despoiled vast swaths of the natural world so that the planet’s privileged few might know the blessings of the discount superstore.

Here in the twenty-first century, a new age has dawned; a new world beckons. Industries are being transformed before our eyes, not by the action of governments or the pressure of political activists, but by the enlightened self-interest of companies that have committed themselves to restoring the ecological balance of an exhausted planet. Saving the world has become the blueprint for the twenty-first century business plan.

This new corporate philosophy is so radical, so fundamentally innovative and inspirational, that the English language has proven sadly insufficient to the task of describing it. Fortunately for those of us who use the language without making any contributions of our own, General Electric has accepted the responsibility for coining a word to describe the corporate philosophy that will transform our world. GE calls it ecomaginationTM.

The invention of this word is a tale of corporate conviction. This isn’t a word scribbled in haste on a cocktail napkin by a corporate vice-president. GE spent tons of money — $90 million by some estimates — to create the word, ecomaginationTM, and to launch it on its journey into the English language. In fact, GE hired BBDO Worldwide, a subsidiary of the Omnicom Group, the world’s largest advertising company, to create and test market the ord before introducing it in May with advertising campaigns in magazines, television, and the Internet.

Perhaps you’ve seen the magazine ad with a tree growing out of a smokestack. Or you may have seen ads in which the coils of a jet engine or a power turbine evoke the elegant whorls of a seashell? 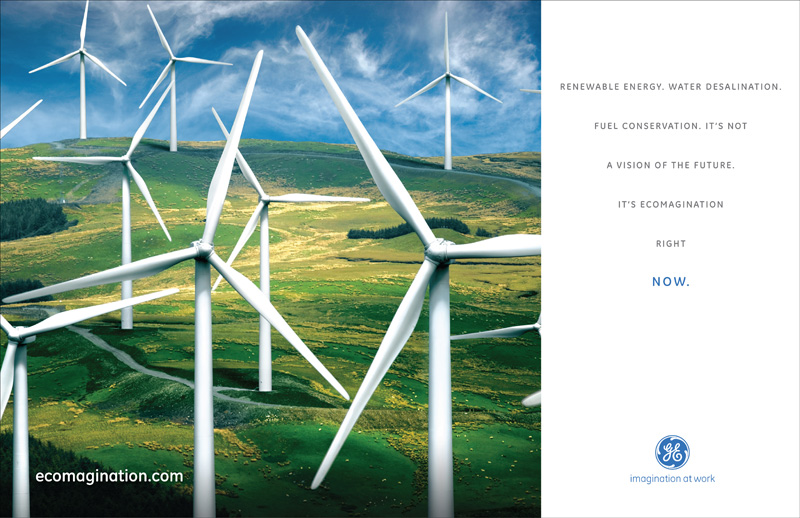 If you watched television this spring, you may have seen the commercial [click for commercial] in which a digital elephant in a rain forest signals his endorsement of General Electric by dancing to “Singin’ In the Rain.” Each in its own way is an example of comaginationTM — “a GE commitment,” “addressing the problems of tomorrow, today.”

Skeptics among you may point to the trademark symbol and complain that ecomaginationTM is nothing but a corporate slogan, or that the accompanying advertising campaign is merely corporate propaganda. With its Epcot Center vibe, ecomaginationTM is a grotesque word, hardly a contribution to the English language, and nothing like a coherent philosophy for environmental change. If that’s what you think, then shame on you! Your cynicism betrays an unhealthy attachment to twentieth-century habits of mind. How can we hope to solve the problems of the world if you refuse to believe that a corporation can be trusted? Why won’t you believe that a company can change? Have you learned nothing from Oprah and Dr. Phil?

Somewhere in the back of your mind, you may have trace memories of General Electric from the twentieth century. Perhaps you recall one of the world’s largest companies, with a reputation for ruthless cost-cutting and spectacular earnings; owner of the NBC television network and the dominant manufacturer in such traditional smokestack industries as locomotives, jet engines, and electrical turbines; a champion of the nuclear power industry, military contractor, and the subject of numerous lawsuits over the dumping of PCBs and other environmental wastes. If that’s your image of GE, then you need to watch the dancing elephant dancing elephant again.

Forget the twentieth century. In the twenty-first century the Earth has no greater friends than CEO Jeff Immelt and the little green men and women of GE. But why should I tell you this, when you can click here and see Jeff himself explain ecomaginationTM? How can you doubt a man who is so sincere, who speaks to you from a website so overwhelmingly green? As he introduces himself to you as Jeff (not the more formal, Jeffrey), his posture is casual, and he’s not wearing a jacket; his hands are folded modestly at his waist, his delivery unstudied — a bit awkward and repetitive. This is not a corporate flack. This is a man so genuine in his commitment to environmentalism that his silhouette turns green when he finishes speaking!

For anyone who understands the scope of the GE corporate empire or who has an awareness of its long history of destructive environmental practices, the ecomaginationTM campaign is risible. Its ambitions are so naked and its rhetorical appeals so flagrant that it makes critical analysis seem ridiculous. Is it really necessary to perform a detailed ideological critique of the dancing elephant in order to understand its persuasive intent? At least one goal of the campaign, therefore, is to erase those memories that stand in the way of one’s innocent enjoyment of a dancing elephant.

If anything is striking about the GE campaign, it is the absence of historical awareness in a PR campaign aimed at revising conceptions of a corporation inherited largely from the past. Who cares how we came to inhabit a world so befouled that environmental cleanup has become a growth industry? Who knows whether GE is one of those companies that polluted the environment? GE wants to be our green knight in shining armor, but it will not issue public apologies, nor seek absolution for its sins. The past simply does not exist when one has ecomaginationTM.

Specialists in branding and public relations believe that a company as large and diversified as GE is essentially incomprehensible except as a series of images. With the ecomaginationTM campaign, GE is conducting a social experiment to test this theory. Can a corporation rewrite its history and transform its identity by wiping clean the slate of cultural memory? If you remember the twentieth century, GE will have failed.

Postscript
Once you’ve viewed the dancing elephant, scroll down the page to see GE’s delirious commercial for coal gasification technology. It’s the one with the hard-bodied male and female supermodels working in a coal mine to the accompaniment of Tennessee Ernie Ford singing “Sixteen Tons.”