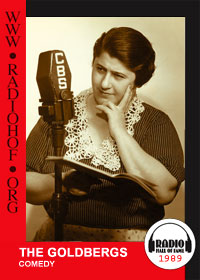 On July 10, 2009 an unusual film biography of an unusual television and radio broadcasting pioneer will premiere at the Lincoln Plaza and Quad Cinemas in New York. The film is Yoo-Hoo, Mrs. Goldberg, and the filmmaker is Aviva Kempner, who had previously produced the commercially and critically acclaimed documentary The Life and Times of Hank Greenberg in 1998. The film will move to the Beekman Theater on July 17 and then go to theaters nationally.

Kempner’s new documentary biography, and a recent Syracuse University Press book, ‘Something on My Own’: Gertrude Berg and American Broadcasting, 1929-56, by Glenn D. Smith1, bring to life one of television’s formidable pioneers: Gertrude Berg. One of the tag line’s for the Kempner documentary is: “The most famous woman in America that you never heard of.” And, indeed, whereas most Americans know Lucille Ball, Jackie Gleason, Burns and Allen and Milton Berle, few have heard of Gertrude Berg.

It turns out that Gertrude Berg was the founder of the family situation comedy on radio and television. She was Lucille Ball and Desi Arnaz rolled into one, a business genius and negotiator as well as performer, writer, director and auteur of her own show — and this during an era when women in up-front power positions were rare. She was known as “Molly Goldberg” on her show The Goldbergs, which ran from 1929-49 on radio and from 1949-56 on television. Kempner’s film gives a fascinating multi-sided portrait of Gertrude Berg, the demons that drove her and the undeniable imagination and talent that made her such a prolific writer-producer and star of early television. Gertrude Berg had extraordinary powers of observation, love for her grandparents’ generation, and an innate drive to write and perform evident from her teenage years when she entertained the children of guests at her father’s Catskills hotel. 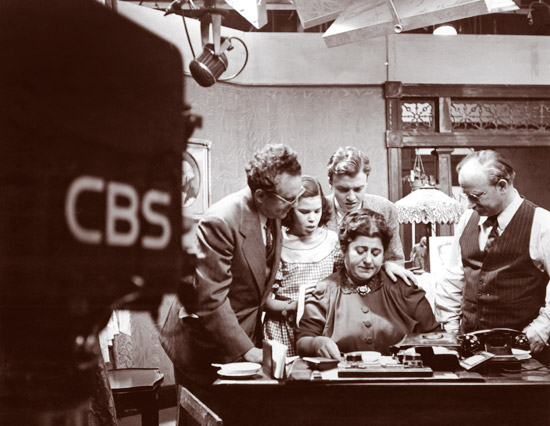 On the set of The Goldbergs

The Goldbergs was The Cosby Show of its time. Instead of an upper middle class African American family in the 1980s, tens of millions of listeners and viewers joined an iconic lower middle class Jewish family in the Bronx. At one point the radio show was simultaneously aired on all three networks, something that had never happened before, and by the end Gertrude Berg’s salary had increased to the then-phenomenal $7500 a week. She received royalties from a daily newspaper comic strip of The Goldbergs and at approximately $500,000 a year, was one of the best known and highest-paid women in America.

The fact that Gertrude Berg was an outspoken liberal and that the The Goldbergs gave a frank depiction of Jewish ethnicity at the height of the McCarthy period, when anti-communism and anti-semitism were rife and often interconnected2, also made the show stand out. Despite Jewish broadcasting executives’ anxiety about shows that were “too Jewish,” The Goldbergs created one place where Jewish audiences had a chance to see themselves.

Three generations of Jewish Americans were represented on the show. On one side of Molly Goldberg and her husband Jake was the first-generation “Uncle David,” with the characteristic shrug of the shoulders and Yiddish theater inflection that made him endearing. On the other side were the third-generation “kids” who were becoming fully American. But it was Molly Goldberg herself, placed squarely in the middle, still speaking the Yiddish-inflected language of the Bronx when she moved to the suburbs years later, who created the central vitality of the show as she opened it each week from her window in the Bronx.

Aviva Kempner’s film and Glenn D. Smith’s book are not solitary phenomena. They are part of a broader re-emergence of interest in ethnicity in popular culture and Jewish ethnicity in particular. This re-discovery of Yiddishkeit — the language, humor, and folk artistry that accompanied the Yiddish-speaking wave of immigration to the U.S. in the latter part of the nineteenth and early twentieth century — has been represented by the rediscovery of traditional Jewish Klezmer music, in its many neo-Klezmer forms; by the Yiddish Radio Project broadcast on National Public Radio3; by the amazing new Yiddish Book Center in Northhampton, Massachusetts4; by a major exhibition, Entertaining America: Jews, Movies and Broadcasting, put on by the Jewish Museum of New York in 2003, and the Princeton University Press book that came out the year of the exhibit (J. Hoberman and Jeffrey Shandler, eds, Entertaining America: Jews, Movies and Broadcasting, Princeton, NJ: Princeton University Press, 2003.)); and by Michael Chabon’s The Yiddish Policeman’s Union, which, as of December 2008, was in pre-production for a movie by the Coen Brothers. 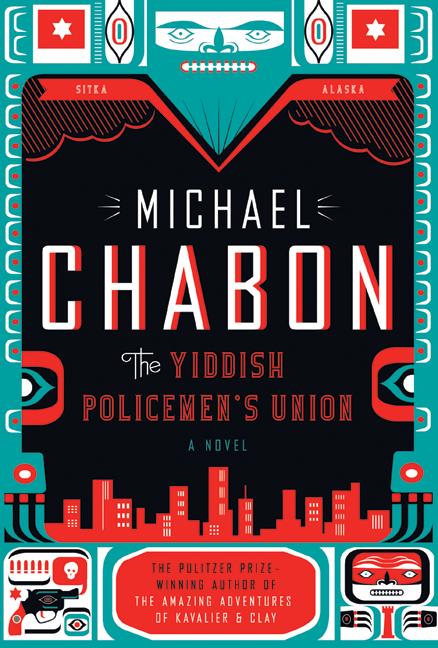 Why did it take so long for recognition to come to a performer who had such an obviously long run and impact on the radio and television industry? How did Lucille Ball become such an icon of early television when, up to this point at least, most Americans have never heard of “Gertrude Berg”?

The answers are multiple – technical, economic, and cultural. Only relatively poor quality kinescopes were available for the classic episodes of The Goldbergs in the Bronx. Desi Arnaz and Lucille Ball had high quality 16 mm masters for syndication and re-runs. I Love Lucy was identified with one network, CBS, throughout its run. It had the advantage of simple network brand identification and loyalty. Through the vagaries of its business history, The Goldbergs appeared on three separate networks (CBS, NBC, and Dumont). Then there was the crucial period during which Philip Loeb, “Jake Goldberg” on the show, was driven off the air because his name appeared on the Red Channels blacklist. Gertrude Berg’s spirited defense of her co-star was, in retrospect, heroic. But her liberal credentials and battle to keep Loeb on the air put her, by association, in the penumbra of the blacklist. It certainly made it both more difficult for her to keep the show on the air as long as she did, and it discouraged Berg and the show from being acknowledged in broadcasting history memorials afterwards.

It is also true that the late fifties and early sixties were a time when other ethnic shows (I Remember Mama, The Life of Riley) were losing favor in the new multi-sponsor corporate environment of network television. Finally, a show like I Love Lucy had the advantage of having instantly recognizable physical humor, pratfalls, and comedy that went straight for the laughs—belly laughs, rolling laughs. The comedy and humor in The Goldbergs and other “dramedies” of the time like I Remember Mama were of a gentler kind, folding into the human situations and characters portrayed. The show was not something that would stop a viewer flipping through the channels watching re-runs on TV Land with the immediate jolt of its images or humor. You would have to want to return to that earlier time and savor the intricacies and richness of the writing, plots, and ethical and moral dilemmas to truly enjoy a show like The Goldbergs. 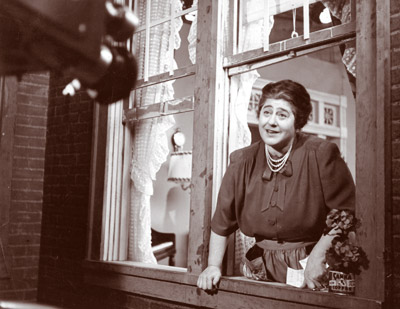 Now, fifty years after the last episode of The Goldbergs, its time may have finally come. With only the suburban “Haverville” episodes of The Goldbergs commercially available up to now, in the next few years the UCLA Film and Television Archive is preparing commercial DVD distribution for the Bronx shows as well. Good television history and criticism are playing a role as well. Aviva Kempner’s documentary and Glenn D. Smith’s comprehensive history of Gertrude Berg finally do justice to a broadcasting pioneer who did as much or more than anyone else to shape the genre of a family, and a situation, on television.