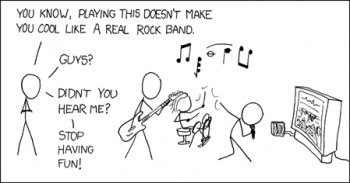 When I tell people that I’m doing research on Guitar Hero and Rock Band, I usually get one of three responses:

2. “Are you studying whether they get kids interested in playing real instruments? Because I read an article about how guitar teachers are getting a lot more students since that game came out.”

People who don’t already have personal experience with the games usually think it’s self-evident that Guitar Hero and Rock Band are only creating musical automatons who suffer from escapist delusions of rock stardom—or, as guitarist John Mayer has said, “Guitar Hero was devised to bring the guitar-playing experience to the masses without them having to put anything into it.”2 If I’m talking to a fellow ethnomusicologist, s/he often assumes that my project involves a critique of the games as the latest symptoms of the decline and fall of genuine musicality and DIY creativity. If there is a saving grace here, it can only reside in the possibility that the scales will fall from players’ eyes and they’ll be inspired to pick up real instruments: in the words of Sleater-Kinney guitarist/rock critic Carrie Brownstein, “[M]aybe by pretending to be in a band, there will be those who’ll find the nerve to go beyond the game, and to take the brave leaps required to create something real.”3

My previous video game project was on Grand Theft Auto, and there, too, much of the non-gamer media response revolved around the relationship between gameworld activities and “the real thing”—only with GTA, the winds of moral panic blew in the opposite direction. Clearly, games like this would inspire players to pick up a real gun or beat up a real prostitute. Think of the children, especially the underprivileged children! As Congressman Joseph Pitts (R-PA) asserted at a June 14, 2006, hearing of the House Subcommittee on Commerce, Trade, and Consumer Protection, “It’s safe to say that a wealthy kid from the suburbs can play Grand Theft Auto or similar games without turning to a life of crime, but a poor kid who lives in a neighborhood where people really do steal cars or deal drugs or shoot cops might not be so fortunate.”4 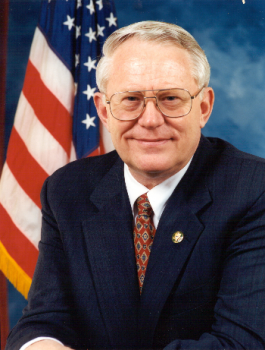 This kind of “media effects” discourse is so well-established and pervasive that it took Guitar Hero and Rock Band in stride. Will these games save real rock music or destroy it? News at 11!

Come to think of it, Congressman Pitts’s logic might be a more persuasive fit for Guitar Hero than GTA: it does seem more likely that a wealthy kid from the suburbs would have the resources to move from playing a plastic controller to taking private lessons on a Fender.

But really, I think this obsession with the relationship between playing Guitar Hero or Rock Band and playing “real music” is missing the point. My standard strategy for explaining my research to those caught up in the effects debate is to point out that playing these games isn’t just like playing real instruments, but it’s nothing at all like just listening to music. It’s a third thing, a new way of musicking. And if you want to get involved in value-oriented debates about it, here’s a thought experiment: rather than concluding that Guitar Hero players are wasting the time that they would otherwise be putting into long hours of practice on a real guitar, consider the possibility that they might otherwise spend that time just listening to recorded music (or, of course, playing Grand Theft Auto). Anyone who has played Guitar Hero or Rock Band for more than five minutes will tell you that it requires a deeper level of musical engagement than listening to an iPod—intellectually, emotionally, physically, and often socially. Moreover, everyone I’ve interviewed for my research reports that the games have substantially changed the way they listen to popular music when they’re not playing. This has certainly been the case for me; after playing drums in Rock Band I started to hear and understand drum parts in a totally new way (forever altering my visceral reaction to heavy metal, for instance). I’ve been running an online survey about the Guitar Hero/Rock Band gameplay experience, and so far 79% of my 480 respondents have indicated that the games have increased their appreciation for certain songs or genres; 75% have added new music to their listening collections because of the games. (A few more stats appear here.) 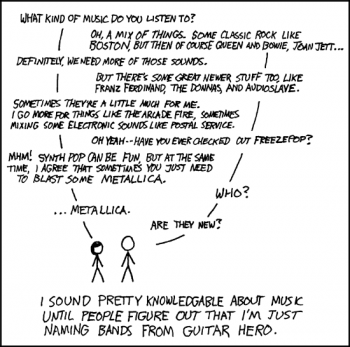 My survey statistics only reconfirm what the music industry already knows: these games have created a huge market for value-added versions of previously recorded popular music. Every song licensed for release in the Guitar Hero and Rock Band games has been broken down into parts and transcribed at four different difficulty levels, creating a new, hard-to-pirate digital music product. Once players have bought a game and a set of instrument controllers, and have invested the time required to achieve proficiency on one or more instruments, they are happy to spend money on new repertoire. (This is a venerable business model; in the nineteenth century, once a family had a piano in the house, they gladly kept buying four-hand piano transcriptions of the latest symphonies and chamber music for parlor entertainment.) In March 2009, Harmonix announced that the Rock Band franchise had surpassed one billion dollars in North American retail sales revenue in 15 months, including over 40 million paid downloads of individual songs. In September, Harmonix will release The Beatles: Rock Band, an extraordinary licensing coup—The Beatles back catalog can’t even be purchased on iTunes yet.

The transcription work, scoring mechanism, and on-screen avatar band are the obvious components of the value-added, of course, but I want to suggest that the most important value-added aspect is the potential for performance. Actually, the term “value-reconstituted” might be more appropriate: you reconstitute instant soup by adding water, and you reconstitute a recorded song by adding performance. In both cases, the quality of the original ingredients makes all the difference. Guitar Hero and Rock Band let players put the performance back into recorded music, reanimating it with their physical engagement and performance adrenaline. Players become live performers of pre-recorded songs, a phenomenon that I call schizophonic performance. Unless I’m off-campus, in which case I just call it a lot more compelling than listening to a recording.

Value-reconstituted songs make some people very uncomfortable, because rock music is supposed to be über-authentic hard work. Instant fame is only for industry-manufactured sellouts, and hitting buttons on a plastic controller to release someone else’s hot guitar solo seems a lot like lip-syncing—it’s not even as authentic as karaoke. But players aren’t deluded; they’re quick to point out that they understand the difference between playing instruments and playing Guitar Hero. (It’s worth noting that 74% of my survey respondents have experience playing instruments; 49% have experience playing guitar). They know that the “instant” songs that they play in Guitar Hero and Rock Band are packaged, commercialized, and designed to be labor-saving, but that doesn’t spoil their musical experience. Just add performance, and the music blooms into new life.