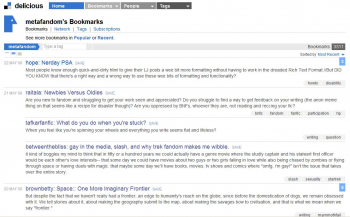 A quick snapshot of bookmarks of interest

Public perceptions of online discourses often seem to exist in direct contrast to actual media and communications studies research. Mainstream media, parents, and many older users try to understand if not control a generation which is at ease with diverse forms of electronic communication and at the same time ignores many of the simplest safety precautions. One response might be to assume that young users are simply not aware of how public the Internet truly is, but that assumption doesn’t hold true. Danah Boyd, who frequently addresses the issue of public and private spaces online, describes users awareness of the accessibility of their information as follows: “bloggers aren’t naive – they know they’re talking in public and they view the benefits of being public as more important than the risks.”1 Online users in fact may weigh risks of potential exposure against the pleasures of online engagement.

Layered Publics
This much more nuanced approach bears out across social networking sites where often different privacy settings are offered, if not always employed, so that simple dichotomies of private and public spaces seem to fall short of the more complicated realities of current social media experiences. Boyd usefully terms this distinction between different forms of public discourses layered public, thus invoking an image of degrees, a continuum of public and private rather than the dichotomy usually employed. The issue of layered publics is important not just in our understanding of how social network users see their own shared information but also in the way we treat their writing when using it in our research where use of these sites presupposes our awareness of the privacy issues surrounding them.

In the following, I’d like to suggest that the apparent disconnect between online users’ awareness of their information being both accessibility and often archived outside of their control is neither a happy embrace of this brave new world nor complete paranoia but instead a certain internal optimization weighing potential wanted readers against unwanted ones. To do so, I like to employ—or rather invert—the concept of attention economy, to address the perceived privacy that many users believe to have, even in the face of public and easily accessible sites. I want to look at journaling sites and the controversies surrounding unauthorized linking to illustrate this particular understanding of privacy in which users subjectively consider their posts semi-public even as they may objectively know that they are not.

Attention Economy
Michael Goldhaber’s 1997 essay “The Attention Economy and the Net” provides a model that can explain some of the blatant privacy exposures we frequently see online even within spaces that are clearly open and among users that are well aware of that publicness.2 Whereas Goldhaber and most of those who use the concept of attention economy are concerned with attracting eyeballs and gaining attention, by the same token, the sheer amount of material online, especially within the more ephemeral spaces such as blogs and social networking sites all but guarantees that most posts are only read by small numbers of readers. Said more bluntly, if a blogger knows she has a certain number of readers, she may expect a straggling stranger to come in here and there but can with pretty good certainty assume that her readership won’t be much larger than that.

Inverting the attention economy model allows us to conceptualize the way online users seem to consider themselves hidden even while their writing is completely public. After all, if attention is the scarce economy, if everyone competes for attention, then wouldn’t it be plausible that lack of attention creates a semi-private space? Especially when users chose to block search engines, thus consciously avoiding random attention, they may indeed assume that their writing goes unnoticed merely by not vying for attention. When especially young people flaunt of private and personal information in easily accessible spaces, they are not unaware; they simply assume that the information overload will hide them in semi-anonymity. 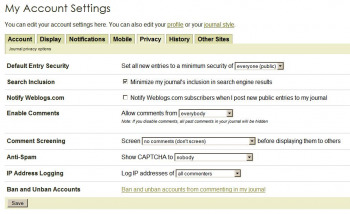 Linking and its Vicissitudes
One particularly frequent online behavior that often thoughtlessly yet without malice attracts unwanted attention is linking. Different online spaces over time have developed different codes of ethics, and when spaces with diverging ethos intersect, cultures clash in their varying expectations, especially in terms of privacy. Even when the blog that links to another does so for positive reasons, the exposure may still be undesirable. Linking, after all, is part of the alternative economy of the blogosphere: if the goal of the blogger is to address as wide an audience as possible, any new readers driven to the blog is positive. That is not the case with all public journals or diaries, however. Especially on journaling sites like Livejournal.com, which emphasizes the interpersonal over the public journalistic, writers may indeed write for a clearly intended (often quite small) audience. When such journals get linked by one with much larger audiences, the exposure is often unexpected and undesired.

As a result, the user’s semi-privacy, illusory to a degree but also on another level quite effective for most users, is destroyed when a highly frequented sites links to a particular post. Thus, even when the user may very well know that their entries are public and viewable by everyone, they often function as if they weren’t. It indeed may not constantly be on their mind that the world might read them. Especially if the group of people reading them is small, they expect that only a few people may see their writing and can be utterly shocked when the online world descends on them. While many online users may enjoy the attention a high frequency site linking them may bring, others feel less comfortable with sudden wider exposure: they may ask for the link to be removed or even close down their posts entirely. Their negative reaction, however, suggests that even as their posts are public they are often not perceived as such. 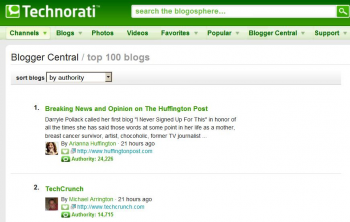 The Importance of Context
Moreover, random linking into a journal may also misrepresent the blogger. Especially those journaling with a small and familiar audience often understand their entries as part of an ongoing conversation. Such shorthanded arguments tend to read very differently to an outsider than to the group that was the initially intended audience. Their tone may be ironic yet an outsider linked cold to that post may not know that.

What is important to realize is that most bloggers post with a clear audience in mind, a fact even more pertinent to those users who purposefully prohibit search engines and do not look for as large an audience as possible. In such cases, their intended audience may be quite small and know the blogger as well as his or her beliefs, biases, and opinions on various subjects. Moreover, often their entries are not to be considered in a vacuum but are part of an ongoing conversation that spans over various posts and comments (and often even a variety of blogs). Observing such a conversation from the outside may easily take things out of context, because the context is only known to the intended audience (or sections thereof).

Research Ethics
Academic online researchers face similar issues as their bibliographic research requires them to link into communities, exposing and analyzing sites and conversations. When using material from such semi-private spaces, researcher should be aware and acknowledge not only the actual privacy that a given space offers its users but also the way a given site may be perceived. Moreover, the issue of consent remains an important one where consent is not only to the actual words but to the context—and possibly other authored texts surrounding the quotation. Blogging and journaling communities just like bulletin boards are not simply public utterances or quasi-published pieces but often conversations that arise within a particular community.

The dilemma that online researchers have to confront is how to respect a user’s or group’s perceived privacy while simultaneously not ignoring their voices. After all, such an approach may easily disadvantage certain sites and users who are less eager for publicity. In fact, there may be a danger in treating different sites (and thus the textual artifacts) differently, which can create a hierarchical system, where certain texts are given author-worthy status whereas others are read as mere detached utterances. In other words, if we only cite from those blogs that understand themselves to be clearly in public space, we may ignore both the possibly less guarded (and thus more unmediated?) voices as well as those who do not have the comfort or privilege to push themselves into the public light of the attention economy. Balancing our research to respect those voices without exposing them unnecessarily is one of the central challenges of online researchers.

Kristina Busse teaches in the Department of Philosophy at the University of South Alabama. She has published a variety of essays on fan fiction and fan culture. She is co-editor, with Karen Hellekson, of Fan Fiction and Fan Communities in the Age of the Internet (2006) and founding co-editor of Transformative Works and Cultures, an online-only international peer-reviewed journal about fan cultures and fan works.