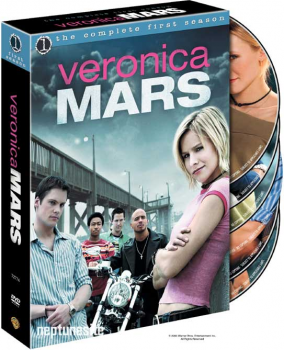 In my previous two FlowTV columns, I discussed the aesthetic value of television programming; in this column, I’ll turn to a value that is more commonly considered within media studies: the exchange value of TV programs. We all know that in the U.S., and increasingly the entire world, television is a relentlessly commercial system in which the primary goal is profit. So what is a television program actually worth?

I began to reconsider this question over the summer, as I engaged in a different type of exchange with TV programs. As last year’s television season progressed, I began to hear positive buzz about the new program Veronica Mars, both from friends and TV critics, with the tantalizing tag of “the new Buffy.” Alas I hadn’t watched the show from the beginning — it’s on UPN after all! — and one of the show’s reputed strengths was its season-long story arc. So I was faced with a choice: start the show midstream and miss out on the long-term arc, continue in ignorance of a potential TV gem, wait until the show is released on DVD (it just was on October 11), or find another way to access the show.

This other way was through the black market realm of online file swapping — in case you haven’t heard, people use the internet to trade files, often in potential violation of copyright laws. While much of the legal and moralistic hoopla around online file-trading has focused on music and film titles, TV shows enjoy a robust circulation via peer-to-peer software, and provoke a more complicated reflection on what is actually being exchanged and/or “pirated” through these unauthorized swaps.

The most interesting — if you’re a techie interested in networking protocols, if you’re a media exec looking for new distribution strategies, or if you’re a communication theorist — of these file-trading protocols is BitTorrent, a free open-source program that offers a radically different approach to online distribution. Typically if you download a file, the more popular it is, the slower the download — as every download stream competes for finite bandwidth from the originating server. With BitTorrent, every downloader is simultaneously uploading the portions of the file they’ve received to other downloaders, creating a “swarming” cooperative distribution system in which the more popular a file is, the faster it downloads and the less burden is placed on the original “seed” file. Thus unlike typical economic systems in which increased demand results in scarcity of supply, within BitTorrent demand directly creates abundant availability. When cyber-theorists extolled the utopian collaborative model of a decentralized internet, this is close to what they had in mind.

So what does this have to do with television’s exchange value or me wanting to watch Veronica Mars? In May, I downloaded the entire season of Veronica Mars via BitTorrent, and proceeded to binge on the series over a week spent in Los Angeles. (And to briefly return to aesthetic value, it was as good as the hype, so watch the Season 1 DVDs if you haven’t seen the show.) This would certainly be viewed by the industry as an act of copyright violation, as I had no permission from either distributor UPN or producer Warner Brothers to copy the program — although I vigorously and publicly assert my fair use rights as an educator and critic to access and use material for educational purposes.

I do think there’s a reason why we’ve heard little about the television industry pursuing file traders though. The economic model of the TV industry suggests far less lost exchange value than for music or film. First off, there was simply no sanctioned way for me to watch the season from beginning to end starting in May, as UPN’s rerun strategy was non-chronological and the DVDs were not released until after season 2 started (dumb move, as new episodes refer directly to the web of mysteries solved in season 1, thereby spoiling many pleasures for late-adopters). Thus it is not as if me downloading an episode was a choice that circumvented a legitimate way of watching the episode: it was either black market or no market. 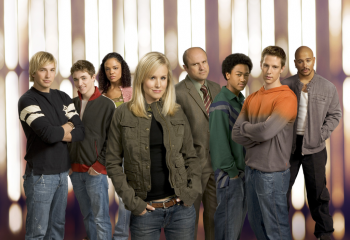 If I had been on the ball and started watching Veronica Mars from the beginning on UPN, what value would have been gained by the industry? If it’s not offered on a premium channel like HBO or a pay-per-view system, there is no direct cost incurred by watching a television program. Since I have never been a Nielsen family, my viewing habits do not factor into the elaborate exchange of audiences between networks and advertisers via the currency of ratings. The only way (at least that I know of) that I ever “count” in TV economics is via the aggregate numbers that TiVo sells to the industry on its subscribers viewing habits, and since I’ve already created a Season Pass for Veronica Mars, I’m registered within that fuzzy system. Throughout television history, broadcasters have employed the rhetoric of “free TV” to stave off competition from film, cable, and satellite industries; it is hard to see how this can be spun into an effective argument (rhetorical, not legal) against acquiring “free television” from another “free” source.

I would argue that my black-market binge actually offered more value to the industry than had I followed UPN’s schedule. Since I watch via TiVo, I don’t watch ads via either broadcast or downloaded television, so that’s a wash. Through my marathon viewing, I became a bit fanatic about the program, raving about it to everyone I could and often encouraging friends to watch an episode with me. I sat through the entire series again in midsummer, to hook my wife into the show’s numerous pleasures. And I was inspired to take advantage of my academically-sponsored role as (admittedly marginal) tastemaker, by using the show in future teaching, requesting my college’s library to purchase the DVDs, and of course writing this column.

The protocols of BitTorrent also suggest a different type of exchange value. Since download speed and availability improves with increased demand, the system encourages taste hierarchies through the practice of digital exchange. These hierarchies do not match the rankings offered by Nielsen — as reported in Wired, some of the most popular BitTorrent series also receive high broadcast ratings (like Lost, American Idol, and ), but other shows are far more popular online than on air (like The O.C., Smallville, Family Guy, Battlestar Galactica, and The Daily Show). It is not surprising that download popularity also often matches success in the DVD market, as these are programs that offer rewatchability, and that viewers feel sufficiently passionate about to risk lawsuits and navigate technical difficulties. By downloading (and simultaneously uploading) Veronica Mars, I am participating in an exchange that adds value to the program through active consumption.

As Lawrence Lessig convincingly argues in Free Culture, illicit downloading may reduce revenue from those potential consumers who illicitly download rather than purchase content, but it also creates new consumers by enabling them to discover and try new content before purchasing. When applied to television, the question becomes what “purchases” might be lost by downloading television rather than watching it over the air? And might the TV industry look at purchases gained by viewers who discover and sample content online, leading to future viewers and DVD sales (a point Henry Jenkins discusses in his last Flow column)? We’re clearly in the midst of a series of transformations in the television medium and its industrial structures — personally I think the peer-to-peer distribution of programming should be viewed as part of the solution to rather than a cause of broadcast television’s potential demise.

Despite weak ratings, UPN renewed Veronica Mars for this season and Warner released the DVDs (which I’m happy to note has cracked Amazon’s top 20 for DVD purchases!). This was seen mostly as a response to strong critical responses to the show and an active online fan presence building word-of-mouth. Illicit exchange of television is part of this process, whether it’s via the efficient online distribution of BitTorrent or the older but still vibrant tape-trading community. Fans of the show hope that a summer of buzz, including from Buffy guru Joss Whedon and Clerks auteur Kevin Smith (who both seem to have seen the show through endorsed “illicit” advanced promo DVDs), can result in increased official exchange value in the form of higher ratings and strong DVD sales.

Personally, I have “gone legit,” shifting Veronica Mars off my computer and onto my TV (of course through another computer, my TiVo). But by me watching the show via more conventional broadcast methods, I have reduced the exchange value of the program — I count neither as a member of UPN’s commodity audience, nor as an uploader increasing access to other viewers. In a strange twist of logic, the exchange value of my consumption decreases by accessing the show on the industry’s desired terms, suggesting a potentially fatal flaw in today’s broadcast model.

In the brief gap between writing this column and putting it on Flow, Apple announced its Video iPod, clearly answering my question: a TV episode is worth $1.99. Further thoughts to follow.