As a media studies scholar and an incurable political junkie, I watched with fascination this week as the drama surrounding the (initially) anonymously posted “Vote Different” advertisement unfolded. In my previous article for Flow, I addressed some reservations about the hype regarding participatory culture, while the 2006 elections clearly depicted the potential for online videos to shape political discourse.

The “Vote Different” video, in my reading, raises further questions regarding the potential of the internet to shape the political process, questions I’m not entirely sure I can answer. These questions grow out of the following dilemma: While I remain unconvinced that the “Vote Different” advertisement significantly altered the current political discourse, I still find the underlying message of citizen empowerment irresistible.

“Vote Different,” a mashup of the highly-regarded 1984 Apple Macintosh Super Bowl advertisement directed by Ridley Scott, replaces the IBM-style Big Brother figure in the Apple advertisement with footage of Hillary Clinton’s “Conversation with America” speech. The ad famously depicts a dreary world in which workers wearing identical grey clothing move listlessly through their workday while passively absorbing the messages delivered from the giant screen that hovers above them. As Senator Clinton speaks to the inert audience, an athletic woman sprints through the crowd, throwing a hammer through the screen, and by implication shattering the “politics-as-usual” she has come to represent. Edited onto the woman’s t-shirt is a modified Apple logo made to resemble an O, identifying her with rival presidential candidate Barack Obama. The original advertisement, an allegory of the Macintosh user fighting against a conformist establishment, maps neatly onto cultural desires for a more participatory political system.

The mashup is one of the first truly viral videos to emerge from the 2008 presidential election. The original “Vote Different” video had been viewed over two million times on YouTube alone, but its real online audience would be almost impossible to measure. The video has also inspired a number of imitations, including this clumsily assembled anti-Obama mashup of the same Macintosh advertisement with the Illinois Senator’s popular Monday Night Football appearance.

Of course, one of the reasons the advertisement is so successful is its creative reinterpretation of Ridley Scott’s original Macintosh advertisement, which aired only once during the 1984 Super Bowl. While the mashup attempts to align Senator Clinton with “politics-as-usual,” through the reference to Apple’s “revolutionary” brand, it has the added bonus of bringing the legendary Apple advertisement back into public consciousness (in fact, I’m not sure that I had even seen the original Macintosh ad since its 1984 broadcast).

Much of the controversy surrounding the video can be attributed to the fact that it was originally posted anonymously on YouTube several weeks ago under the pseudonym, ParkRidge47 (Hilary Clinton was born in Park Ridge, Illinois in 1947). Because the video was posted anonymously and because it explicitly identified Clinton with Big Brother, a number of readings emerged on the web attributing the video not only to Obama supporters but also to Republican activists. While the anonymity initially posed a number of interpretive difficulties, Jeff Jarvis argued in The Washington Post that the anonymously posted advertisement betrayed an important trust within political discourse, representing the possibility that attack ads could come from “anywhere.” The video’s creator, Phil de Vellis, eventually stepped forward, taking credit for the ad when it became clear that his work on it might reflect poorly on his employer, Blue State Digital, which had worked on the Obama campaign. De Vellis’s involvement with Blue State Digital certainly raises questions about whether the advertisement is genuinely the product of a “political outsider;” however, the repeated viewings certainly suggest that the advertisement has struck a chord with the groups who have been closely following the 2008 election. 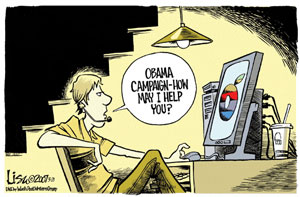 The debate about the advertisement also managed to attract the attention of newspaper and cable news analysts who typically argued that its popularity marked a historic shift where anyone could participate in the election process. In fact, the advertisement has prompted a number of observers to describe the advertisement as “revolutionary,” with Peter Leyden, director of the New Politics Institute, arguing in the San Francisco Chronicle, that the ad is “about the end of the broadcast era.” However, while the ad is no doubt powerful and illustrates the potential of citizen media, I can’t help but find myself feeling skeptical when I hear phrases like “revolutionary” and “end of the broadcast era” being thrown around. Instead, it’s worth emphasizing that the ad’s popularity actually depends in part on the broadcast media that it supposedly threatens. De Vellis himself promoted this reading on The Huffington Post, commenting that “the specific point of the ad was that Obama represents a new kind of politics, and that Senator Clinton’s ‘conversation’ is disingenuous. And the underlying point was that the old political machine no longer holds all the power.”

Whether de Vellis’s specific point about the Clinton campaign is true, I remain somewhat uncertain regarding the role of voter-generated content in shaping political discourse. The advertisement does little, in my opinion, to change popular perception of the two Democratic frontrunners. Clinton will continue to be perceived as the Washington insider identified with traditional political campaigns while Obama’s image as someone who will reinvigorate the political process remains unchanged. It is clear, however, that these videos are attracting audiences because they tap into larger cultural desires regarding the election process. As David Weinberger pointed out in the Washington Post article, “expressing frustration and unhappiness with the level of control that her campaign is exerting.” I certainly recognize the degree to which the “Vote Different” advertisement and its popularity is an expression of the desire to open up the election process to greater participation. And the expression of this desire may be the great contribution of “Vote Different” to our ongoing conversations about democracy and participation.