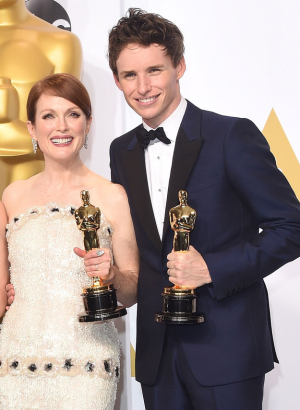 2015 Oscar Winners Julianne Moore and Eddie Redmayne both portrayed characters with disabilities.
Web series, or independent television, are exciting spaces for the development of innovative episodic video narratives. Series such as Dr. Horrible’s Sing-Along Blog (2008), The Guild (2007-2013), Awkward Black Girl (2011-present), and The Lizzie Bennet Diaries (2012-13)—among countless others—have indicated the new frontiers of film style, representation, and audience engagement that are possible in a converged media landscape. More recently, web series such as Broad City (2009-11) have made the transition to television, and web series creators such as Issa Rae have earned development deals.

Many web series arise from dissatisfaction with existing media, and particularly a dissatisfaction with representation. Aymar Jean Christian argues that the production of independent television is a way that fans-turned-producers may intervene in representations via series “aimed at underserved niches, primarily people of color, women, and gay people.”1 In other words, creators may transform critiques of existing representations into content that provides alternatives. Furthermore, they may do so by operating outside of oppressive industry structures, as the web enables them to reach their audience directly. Thus, new representations may foster new industrial arrangements, including the diversification of talent on- and off-screen.2

For people with disabilities, dissatisfaction with mainstream television representations has long been widespread. From the much-critiqued muscular dystrophy telethons, with their invocations of pity and paternalism,3 to the current near-absence of disability on network television,4 it seems that mainstream television has not found a way to represent disability that resonates with audiences of people with disabilities. Instead, far too often, media representations focus upon the exceptionalism of someone who “overcomes” disability, or portray disability as a tragedy. Even when disability is represented onscreen, it is very rare to see actors with disabilities in these roles; instead “crip face” often acts as very successful Oscar-bait, allowing non-disabled actors to show their range and a largely non-disabled audience to reward narratives that conform to an able-bodied perspective on disablement.5

Historically, some of the prime venues for disability representation on television have been in ABC’s After School Specials (1972-1995) and in “very special episodes” of television series aimed at teen audiences. Julie Passanante Elman argues that After School Specials regularly featured stories of teenagers overcoming disability and used that story as a metaphor for the growth process of adolescence writ large.6 Disability, in this case, was not presented realistically or for a disabled audience, but was used as a metaphor through which to educate and reassure an able-bodied audience. Sharon Marie Ross briefly describes “very special episodes” in similar terms for essay writing: ” a special character is brought in (usually never to be seen again) who calls attention to bigotry and ignorance for one day” or ” a main character deals with an intense issue . . . the problem is resolved relatively quickly, and once resolved it is never mentioned again.”7 Such a structure brings up “issues” (including disability) for the edutainment of a mainstream audience, but does not engage with persistent material, social, or cultural realities, returning instead to a sanitized status quo. In such an environment, it is no surprise that representations of disability on television tend to the stereotypical.8

One challenge to achieving more complex representations of disability has been the inaccessibility of the media industries to people with disabilities. Recent research indicates that production industries remain largely white and male, and do not even include disability as a demographic category worthy of measurement.9 However, it is hard to imagine that workplace accommodations for disability are looked upon favorably in the increasingly flexible contract-based labor markets of Hollywood film and television production.

It is in this respect, then, that web series have important potential for contributing to the conversation around representations of disability; access to production is made possible by increasingly affordable, usable, and powerful technologies. With access to production comes the ability to produce content that includes complex representations of disability and speaks to a disability community (instead of, or in addition to, a mainstream audience). This is what I refer to as “cultural accessibility”—the ability to access culturally relevant, collaborative, and inclusive media content and production.

Three web series in particular are useful for considering cultural accessibility, and each offer complex representations that go well beyond the stereotypical or “special.” Not coincidentally, two of the three also invoke the language of “special,” simultaneously commenting upon its history of Othering people with disabilities and invoking it as a marker of the unique points of view available in these alternative media productions.

First, The Specials (2009) is a UK series that produced one season of a reality-type documentary series in which young people with Down’s Syndrome shared a flat and were filmed. The use of “specials” in the title may recall after school specials, but it is most clearly tied to notions of “special education,” a space in which people with intellectual disabilities are often segregated from their age-based peers. The “specials”—people from special education—are here presented not as outsiders but as a supportive community and as participants in the wider world.

[youtube]http://www.youtube.com/watch?v=csxpkTGQXPU[/youtube]
Episode 1 of The Specials
The Specials offers a case study in cultural accessibility as it relates to both representation and production. Some specificities of life with Down’s Syndrome are acknowledged, but those details are not used to diminish or ostracize the characters, making it both a relevant and inclusive form of representation. Furthermore, the housemates are either enrolled in college or engaged in the workforce, illustrating their inclusion in the wider world to buy dissertations and their ability to live semi-independently in community with one another. In terms of production, The Specials was created by two non-disabled media professionals; the housemates were filmed, and editing took place in the shared apartment. According to the series website, there was an effort made at collaborative production as “the housemates provide the voiceover to the series and have also collaborated with Dan in the development of the website and as a result we hope this site is the Specials sharing their world on their own terms.”10

Secondly, My Gimpy Life (2012-2014) produced two seasons following paraplegic actress Teal Sherer (playing a version of herself) in the “awkward adventures as a disabled actress trying to navigate Hollywood in a wheelchair.” Sherer, who appeared in two seasons of The Guild, drew upon her proximity to web series production, working with Guild director Sean Becker and employing members of “the guild of extras”11 as well as featuring appearances from actress and web producer Felicia Day.

[youtube]http://www.youtube.com/watch?v=EjdN81GmUTc [/youtube]
Episode 1 of My Gimpy Life
Cultural accessibility is evident in the highly collaborative processes that go into the production of My Gimpy Life as well as in Sherer’s explicitly activist mission and her participation in a larger disability arts culture. The second season was funded on Kickstarter, enabling viewers to contribute to the production and leading to a series of behind the scenes videos that illustrated the production process for interested fans. The cast includes several actors with disabilities in addition to Sherer, and the episodes combine explicit education with humorous stories of romance and friendship. Sherer is active in disability arts communities, having participated in integrated dance companies and as cofounder (with two other disabled women) of a theater company called Blue Zone.12 She has explained her mission with My Gimpy Life in explicitly activist terms, emphasizing access issues and ableist ideologies in the text because “deep down I hope that it will somehow help change these things.”13 In addition to using representation to intervene in these issues, Sherer has indicated that she would “like to see more disabled directors, producers, writers” behind the camera, diversifying production.14

Finally, Very Special Episodes (2014) recently debuted, starring Cheryl Green and Caitlin Wood. Inspired by Wood’s Kickstarter book project Criptiques, “a space of shameless flaunting and significant contribution to crip culture by crip culture” (3), Very Special Episodes explores a number of disability-related issues while primarily identifying itself as a comedy series. The title is a direct riff on the very special episodes of mainstream television programs in which disability was raised, and dismissed; here, disability is ever-present and not always the point.

[vimeo]http://vimeo.com/113341943[/vimeo]
“Visit” Episode of Very Special Episodes
Like The Specials and My Gimpy Life, Very Special Episodes (2014) exhibits cultural accessibility in its relevant and inclusive cross-disability representations and in the collaborative and culturally relevant nature of its production. However, it is explicitly produced for an “in-group” audience; as described by Bitch Media, the series does not attempt “to educate or inspire nondisabled people. Instead it speaks directly, candidly and humorously to people with disabilities about experiences they might actually recognize.” Part of this entailed prioritizing a disability perspective, and in Green’s words, ” avoiding letting nondisabled people make the shows.”15 In Wood’s introduction to Criptiques, she writes of “the inherent rebellion found in crip culture… defying mainstream culture’s insistence on our subordination and doing it with style and humor.”16 Very Special Episodes displays that inherent rebellion; the appearance and authorship of two disabled women is, itself, a challenge to conventional media representations and means of production.

These web series provide a radically different perspective from which to think about access to media cultures. Too often, access is conceptualized as a matter of availability, affordability, or choice; accessibility for people with disabilities has augmented this framework by adding a focus on the technical ability to use media with or without accommodations. All three series are “accessible” through their provision of closed captions, for instance. Yet, in both basic understandings of media access and in official discourses of accessibility, there https://grademiners.com/book-report an emphasis on media consumption and on access to “important” material. For instance, research on the digital divide has distinguished those “uses that increase economic welfare . . . or political or social capital . . ., versus those that are primarily recreational.”17 In these three “special” series, it is clear that access to media culture and production is crucially important.

This is what “cultural accessibility” attempts to capture; the ways in which access to culturally relevant, collaborative, and inclusive forms of media may enable the reimagining of both disability and the norms of media production.