This Content is Currently Unavailable: The Tyranny of Digital Distance, Updated
Mark Stewart / University of Auckland

Content Unavailable on Hulu.com in New Zealand
In 2008, Tama Leaver1 wrote an article in which he discussed the issues that fans of American television face when living in Australia. Among these issues were the delays in the legal accessibility of American content in the Antipodes, and the tendency to geo-restrict access to the paratextual material being generated by producers in order to keep fans engaged with the core product. Drawing on a term coined in the 1960s by Geoffrey Blainey to describe Australia’s geographical distance from other ‘western’ nations, Leaver invokes a “tyranny of digital distance”, highlighting the ways in which historical geographical boundaries still impact media distribution even in the digital age. Leaver notes that the “potential for, and indeed expectation of, near-synchronous global distribution of media [is] not fulfilled”2 .

In 2014, in New Zealand (and, I believe, similarly in Australia), we can reconsider this formerly unfulfilled expectation of near-synchronous viewing. Many major networks have taken steps to reduce the delay in the distribution window while also increasing the level of offering of digital content on demand. Several recent high-profile US dramas have aired in New Zealand within days of their US broadcast (two notable examples, Game of Thrones and Homeland, have aired within 24 hours of original US broadcast), in an attempt to bring audiences back to the live viewing experience. These moves have been greeted warmly by New Zealand audiences, and anecdotally have encouraged some viewers back to watching the broadcast. However, these near-synchronous broadcast windows work far better for premium cable series than they do for traditional network programming at http://samedayessays.org/thesis-proposal-writing/. Cable series are much less likely to be cancelled mid-season, to have weeks where they are not broadcast, or to go on extended hiatus. New Zealand audiences have previously not been used to these sort of vagaries, as the formerly extended distribution windows allowed local networks to air US content without breaks, and choose series for broadcast that had already been ordered to full season3 .

In addition to these reduced windows, the major television networks have also identified specific programming that they release on demand first, with the understanding that the shows will appear on the broadcast schedules at an undefined point in the future. The Originals is now airing on New Zealand broadcast television, but the network that has the New Zealand broadcast rights, TVNZ, began releasing the episodes on demand on a weekly basis not long after they initially aired in the US. A similar approach was taken with the CW’s The Carrie Diaries and The 100. 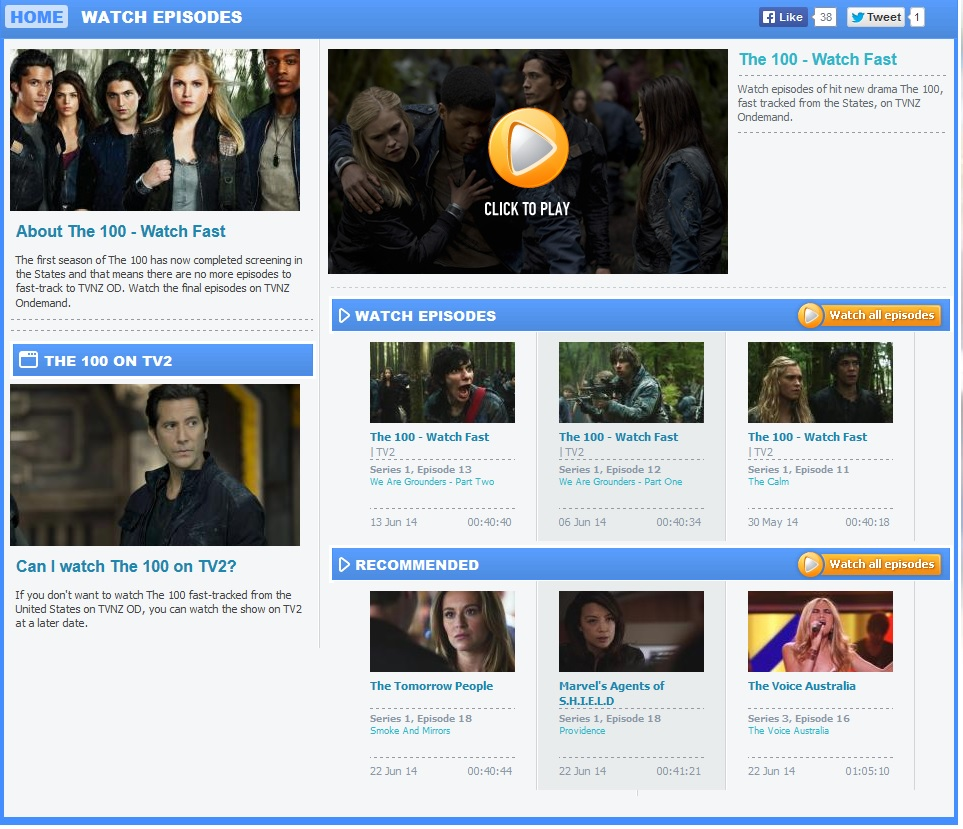 TVNZ On Demand’s site for The 100.
The move to offer programming on demand means that broadcasters are still able to monetise a portion of the audience, through screening advertisements with the on demand content, but it fails to live up to the requirement of near-synchronicity. One virtue it does have, however, is providing legitimate access to more content without overburdening broadcast networks. With a limited number of television networks, and imported series from the US, UK, and Australia broadcast nightly, alongside local content, there is not room in the schedule for all the material being produced. Releasing this programming initially on demand provides legal avenues of engagement, while allowing networks to predict the possible scale of an audience for future broadcast.

These steps are an active attempt to retain viewers who might otherwise be lost to illicit means of access, such as BitTorrent or streaming. Provision of rapid access to content is seen to be one way of reducing the need for audiences to search for their preferred shows outside of ‘approved’ avenues. However, I do not believe that this can be seen as having solved many of the issues raised by Leaver. Even if this near-synchronicity has been at least partially achieved, I suggest that the window of relevance of content access has shrunk even further. With many shared moments of fandom occurring via social media sites assignment online such as Twitter, Tumblr, and Facebook, the viewer runs the risk of being spoiled if they are even hours late in engaging. While there are relatively accepted protocols for the provision of spoiler warnings, or the avoidance altogether of such discussions, these mostly only apply to the three hour window between east and west coast broadcast in the US. Once the west coast broadcast is complete, many American users are far more lax with their warnings, as ‘anyone who really cared would have watched live’4 . In addition, marketing campaigns that invoke the audience, such as Alternate Reality Games, usually require a closer level of contemporaneity than is possible for global viewers, meaning that at best, international fans can be spectators rather than active participants5 . This symbolic erasure of international viewers within fandom can mean that even with decreases in wait times, any delay is seen as symptomatic of the irrelevancy felt by international fans.

This ‘near-synchronicity’ also fails to allow for fans to engage with the live conversations which have become common among online fan communities. Phenomena such as live-tweeting series as they air means that near-synchronous is not close enough; by not viewing the content ‘live’, fans are missing the opportunity to participate in the temporal community that surrounds it. This exclusion is compounded by the fact that when so much viewing is being done ‘on demand’ in some form, rather than at a specified, albeit delayed, broadcast time, international viewers are unable to create their own local viewing communities. Interestingly, New Zealand fans of Supernatural have begun to live tweet the delayed broadcast episodes in New Zealand, often three to four months after they have initially seen it, as a way of developing a local viewing community even if the episodes are not new to them6 . However, given that many of these viewers have already seen these episodes through other channels, this is an affectively different experience. In addition, this still does not allow for experiences such as ‘tweeting with the stars’, when actors or series creatives provide a pseudo-commentary live on Twitter during the broadcast. 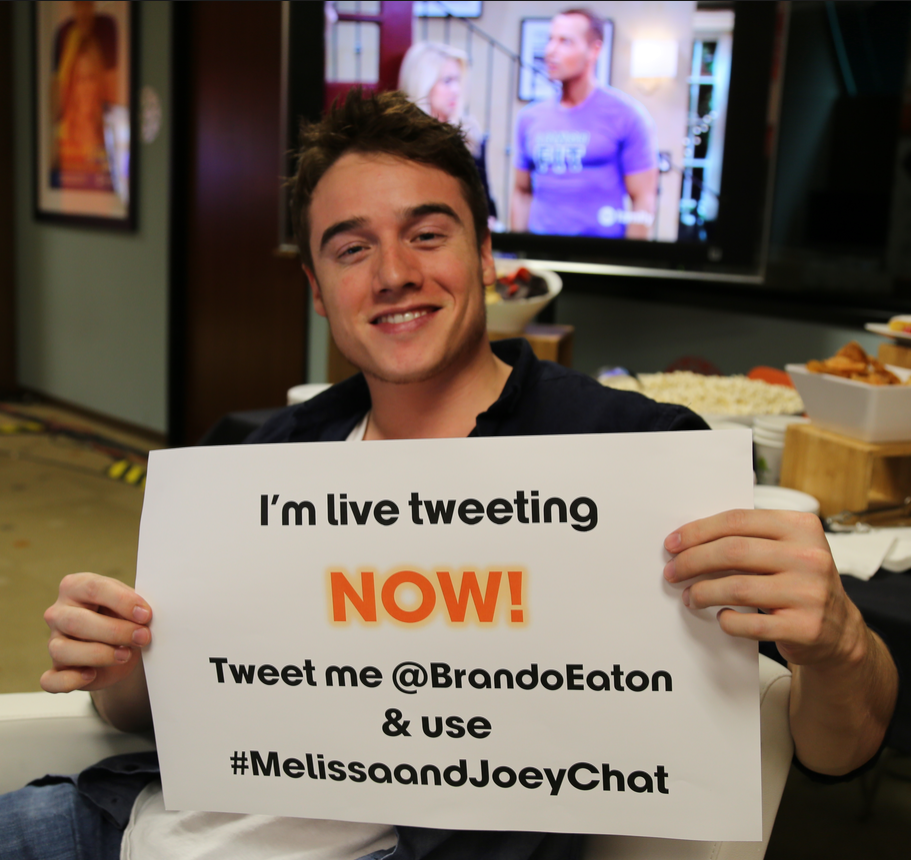 Melissa and Joey had actors live-tweeting almost every episode this season.
There are also still barriers in place for producers to make content available directly to global fans. In a 2013 podcast, Louis C.K. notes that Australian viewers have to wait significant periods to legally access episodes of his FX series Louie, but his distributors have prevented him from offering the episodes for sale from his website. In order to view content in a timely fashion, fans are being given little choice but to find illicit means of access. The traditional global lines of distribution hold steady, even as the Internet makes them less relevant. Willingness on the part of viewers to access content legitimately, or to pay directly for it, is trumped by a need for timeliness. Distributors and producers have taken some steps to provide accessible options to engaged viewers, but does the entire television distribution framework need to be reconsidered in a manner which no longer relies on arbitrary geographic boundaries?

I am not convinced that there is a solution that will provide everything that fans actually seek. The standard call is either for networks to broadcast the content sooner, making international audiences subject to the vagaries of the US network system, or to make the content available legally on demand, reducing the possibilities for fans to be part of a synchronous viewing community. While some fans have turned to illicit live-streaming sites in an attempt to access the content in a timely fashion and to be able to engage with the broader viewing community, this often means needing to be available to view the content during the middle of the day, not something that is feasible for large portions of society. Any of these options solve one problem with book report help, but create another. But does this actually matter as much as we might think? Time Warner’s CEO Jeff Bewkes is on record as saying that there are enormous benefits to HBO from piracy of Game of Thrones7 . Is television piracy the concern that it is sometimes made out to be, and is there any good solution? Will piracy only ever be the purview of a select group of viewers, and what value is lost with them? The tyranny of digital distance lives on, and may not be as easily solved as it might have initially appeared.