The Barest of Them All: The Personal Politics of Maron
Kathleen Collins / John Jay College

In a recent essay about the demise of physical comedy, New Yorker writer Richard Brody described “today’s hyper-verbal comedians, who are rooted in standup, not in fall-down, and who put their souls, not their bodies, on the line.” Comedian Marc Maron is emblematic of this souls-on-the-line vintage and can take some credit for shepherding hyper-verbal comedy–his own but especially others’–to the hip fore and with it a desirable incursion of real life to the internet and now television.

His twice-weekly WTF (as in “what the fuck?”) podcast in which he interviews comedy legends, red hot artists and newcomers, as well as the occasional actor, musician and writer, has been going strong since 2009, has hundreds of thousands of subscribers, and was voted best comedy podcast at the 2012 Comedy Central Comedy awards. In addition to WTF, Maron has hundreds of thousands of Twitter followers, regular appearances at eclectic venues around the country, a second book, Attempting Normal, and a new sitcom, Maron, which completed its first season on IFC in June. 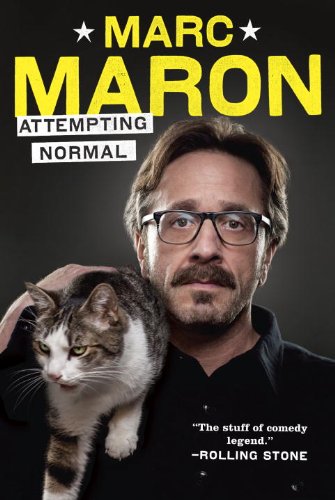 Maron is by all measures a successful entertainer, and true to stereotypical Jewish comedian form, he continues to be plagued by self-doubt and loathing about everything from feeling fat to not feeling funny enough to the meaning of life. He has been open about his desire to end said life a few years ago in the very garage from which he now produces the podcast that simultaneously saved him and touched a cultural nerve. By sharing his innermost thoughts with the public, his unbridled candor serves as the key to unlock others’. As an interviewer, Maron has developed a reputation for digging deep with his subjects, getting to their real stories–to what makes them tick, to what drives their craft–and for arriving at the source of their presumed pathos. He wants his subjects to let it all hang out, and they do. As a Rolling Stone article described, “It’s that after all his years of living that life–the touring, the drugging, the ex-wives, the failure–he’s reached a point of brutal self-candor that makes people open up to him in a way they never would otherwise.”

As a self-proclaimed narcissist, Maron’s angry tirades against self and society, peppered richly with self-absorbed, self-flagellating angst, invites others to do the same. Unlike progenitor Woody Allen, a convincing neurotic Jew but whose shtick was his shtick, Maron is blatantly acting out his personal demons–and it serves him and others. Exposing his weaknesses fosters empathy, camaraderie, solace, and forgiveness. It’s deeply human. Hitting the wide range of notes of human experience allows Maron to hit his stride and compels him to grab the mike.

Comedians have historically spoken truth to power, whether the perceived power is the government, social mores or one’s nuclear family. As a former host on the short-lived, liberal Air America Radio network, Maron still likes to rail about the ills of society on WTF in his pre-interview monologue and during interviews when opportunities arise (many of his interviews play as provocative intellectual discussions, his interview with writer Douglas Rushkoff as one recent example). His sitcom may seem in concept like an ego indulgence or an opportunistic hitch on his own coattails, but its content is fundamentally about human frailty, delivered via the tales of one individual human. In a less direct and more structured venue now, Maron is conveying the same commentary through his TV series as he has throughout his career. Maron is, in effect, an antidote to reality TV and the lack of authenticity in modern culture.

With the show, which premiered in May, Maron joins a long line of comedians who have styled eponymously-titled sitcoms on their stand up personae including Bob Newhart, Paul Reiser, Ray Romano, Ellen DeGeneres, Roseanne Barr, Jerry Seinfeld, Sarah Silverman, Larry David, Louis C.K. and Mindy Kaling. By naming their characters after themselves (only a few donate both first and last), these performers are acknowledging their primary status as comedians, not actors, thereby signifying some relationship to reality in their presentation, though most are heavily fictionalized. With the exception of Ellen DeGeneres’ character Ellen Morgan coming out in 1997, a historical and relatively rare mirroring of a star’s real life, most comedian-led sitcoms keep a safe distance for both the sake of entertainment and self-preservation.

Jerry, Larry, and Louis are Maron’s closest relatives in that they, too, have the same jobs as their characters. Though Jerry, Larry, and Louis, like Maron, document the travails of their daily lives and the characters largely resemble the real comedians, Maron is cut from a new swath of fabric. Jerry was, for the most part, self-confident, never doubting, and barely tolerated the foibles of his compatriots via almost cartoonish plots. Larry, whose predicaments were generally more realistic, was a hyperbolic version of the real David who found fault only outside himself and on a constant basis. Jerry and Larry didn’t know guilt, despite their Jewishness. Louis, in his second and current sitcom, who like Maron seems to wear a constant look of suffering, exudes a broader and weightier sense of morality. 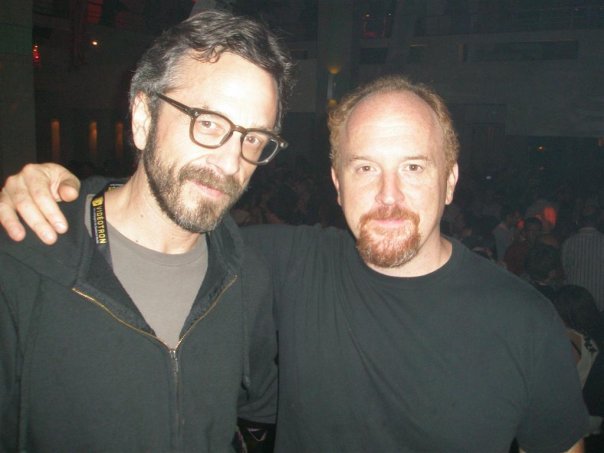 In contrast, Maron is based on Maron’s life so closely that he barely disguises his parents and has discussed how the portrayal of his father has caused even more friction in an already troubled relationship. His romantic life hits so close to home that it’s almost a news documentary. The character of his girlfriend and with whom, in real life he is currently trying to decide if he wants to have a child, is based on his real girlfriend. As he said to David Sedaris (another humorist who uses his real life as fodder) in a recent WTF interview, despite such burdens, “the honesty is worth it.”

Relying on the trappings of the traditional sitcom format with its recognizable narrative structures, Maron would never be categorized as reality TV. Though scripted, it is nonetheless more true to life than most reality TV shows. Among the ten episodes in the first season, Maron deals with running into his pregnant ex-wife, removing a dead possum from under his house, handling the pressure of a “sex fest” invitation, being dogged by an internet critic, and becoming the AA sponsor of an ex-con.

“Let art imitate life a little bit,” as Maron said to Sedaris. While he does not relentlessly harp on the message of authenticity from his various platforms, it is clear that he believes honesty–its acknowledgement and declaration–is a critical virtue, and its pursuit underlies all his work. Manifested in the way be produces his unmediated, organic, low-budget podcast and the sponsors he chooses, honesty is at the heart of Maron’s franchise, as counterintuitive as that phrase sounds. He prides himself on WTF’s raison d’être as just shooting the breeze, getting real, and letting it all hang out. Though he is too young to have come of age in the sixties, he is a creature of that era, fighting against everything but making art from the fallout.

The larger question raised by but certainly not fully answered in this analysis is: What is the value of honesty in entertainment? Would it matter if Maron fabricated a mother entirely different from his real one? She would still exhibit human emotions and behaviors and resemble someone’s mom, if the point is to create relatable circumstances. But, to Maron it does matter. He is honoring his experience and in so doing, sending a message that others have the freedom to do the same, and there is salvation to be found therein.

There is a gender discussion to carry on from here, too. It was always thus that to see men fall is funnier than to see women fall because men have farther to go. Male comic vulnerability, while certainly not new, has an opportunity to provide more satisfaction than usual in the present day. How does a man confront or accept success or failure? In the age of billionaires as modern despots, seeing the anatomy of male insecurity could be revelatory, presuming that Maron and his ilk are descended from the same ancestors as the likes of Bernie Madoff.

It might appear, especially knowing Maron as one inevitably feels she does via the intimacy of the podcast format, that the piling on of Maron outlets results from a vengeful or bitterly-fueled ambition, but it’s more accurate to see his rising from the ashes as good timing. Not only is standup comedy enjoying a surge in recent years, but many of us are craving a degree of actual reality in entertainment. While the airwaves and clouds are rife with reality TV and web series, by now even the most devoted watchers of Real Housewives (or even Fox News) realize that manipulation and contrivances are part and parcel of the form. Some are more produced–in terms of interventions and set-ups–than others, but there is a cavernous generation and cultural gap between Cops and Keeping Up With the Kardashians. Entertainment values have evolved and the shiniest, sexiest, and most salacious have survived. 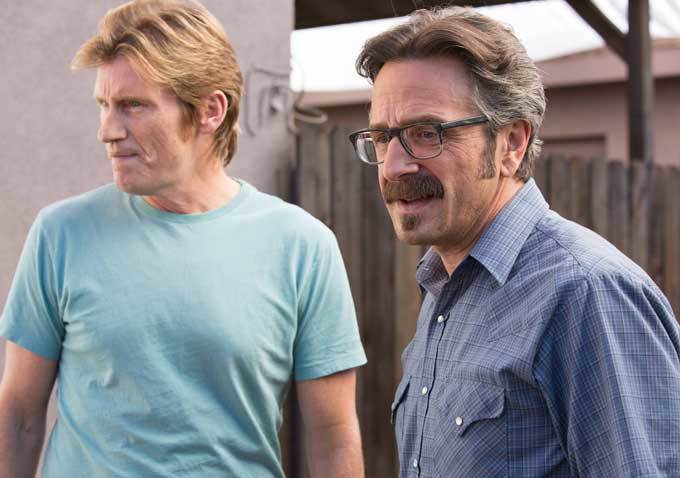 So why does the stripped-down, WYSIWYG Maron work right now? Logistically, he is riding the wave of comedy’s re-ascendance and taking advantage of his podcast success (a burgeoning farm system for TV). Philosophically, it could be representing the apogee of our self-absorbed me-est of all generations whose tagline might be “An untweeted life is not worth living.” But it might also represent a yearning for authenticity. Paradoxical as it seems to look to scripted TV for the truth, Maron provides it, in a smart, funny, guest star-coated sitcom shell.

As the American economy threatens to stall for good, there is some wisdom in facing facts and dealing with our lot–not quite hopelessness, but embracing a new reality. Maron fits with this anti-aspirational aura. Rather than gazing upon hopeful young chanteuses or botoxed millionaires who live in 17-bedroom mansions, it might feel like a comforting relief to some of us to look into a cloudy, handheld mirror. Where reality TV still promotes the American dream, Maron presents human reality. The good news is that we can still laugh at it.