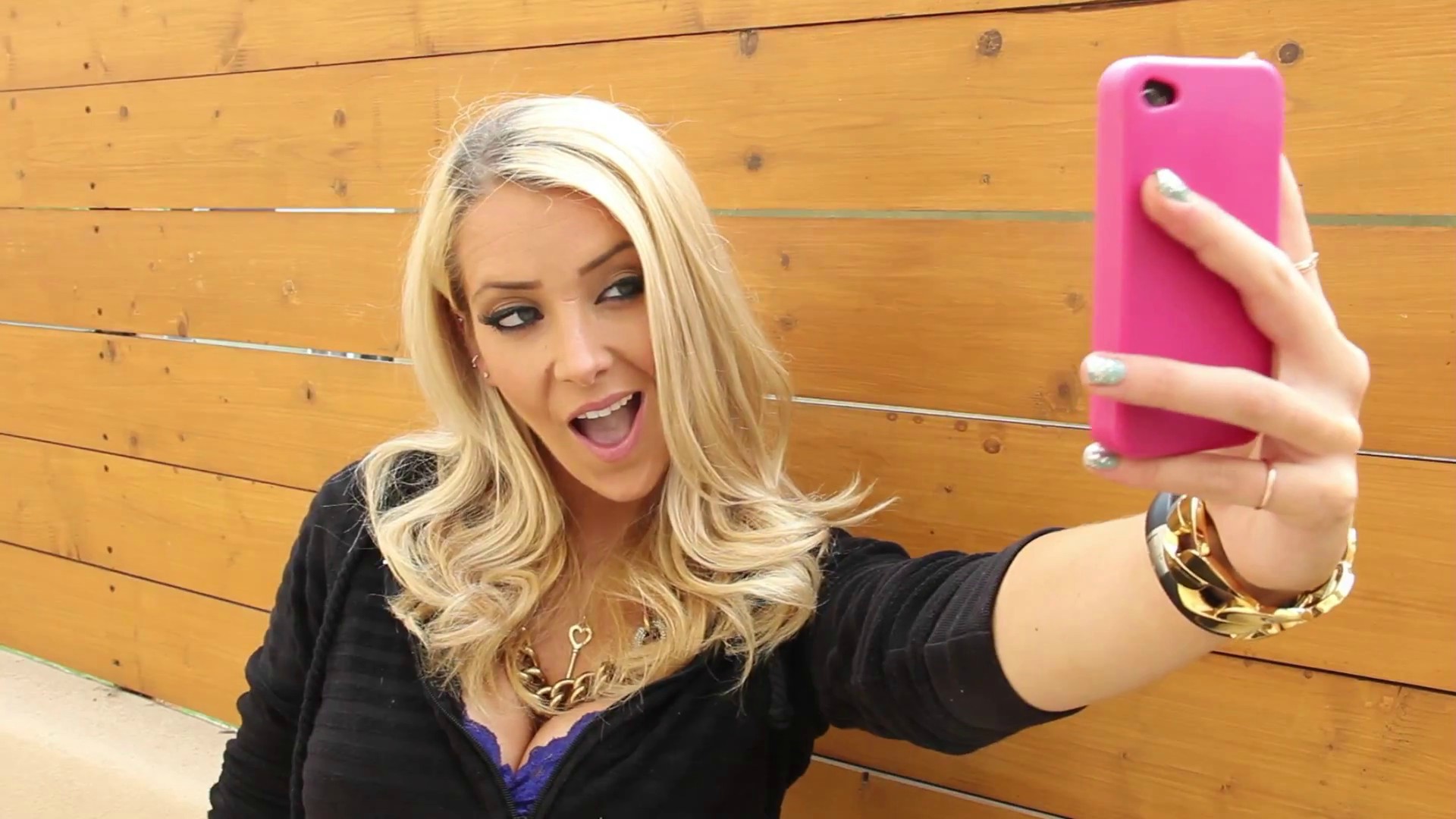 Jenna Mourey, aka Jenna Marbles, was the recipient of a James Joyce Award this past February, joining a roster of illuminati including Salman Rushdie, Noam Chomksy, Desmond Tutu, and Seamus Heaney–all bestowed the honor for outstanding success in their field. The measure of Mourey’s success is the new global currency: internet clicks. Mourey has over a billion of them on her YouTube videos, each one garnering several million views.1 Her métier could be defined as comedian, though it is more accurate and less controversial to call her a YouTube celebrity, a category legitimized now that a new star seems to form every few seconds in the YouTube galaxy. 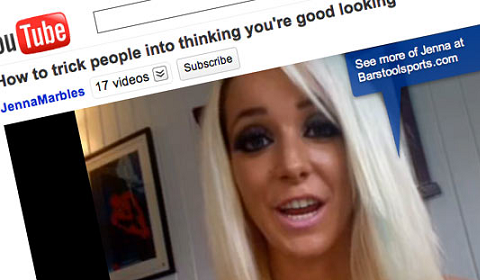 Mourey’s material is the mundane. She ardently monologues about herself, her dogs, and other people. Her videos are voyeuristic, subjective, and addictive–each four- to eight-minute bytes with titles like “What a Girl’s Makeup Means,” “Junk Food Confessions,” and “Drunk Christmas Tree Decorating.” Each episode in many ways looks and is consumed like a reality show, and, with regard to social function, it is that TV subgenre which Jenna Marbles most closely resembles.

One undergraduate student laments the stat that Mourey gets 250 million more clicks than do White House videos. While granting the Marbles videos’ stress release quotient, he sees this disheartening figure as an indicator of Americans’ misplaced priorities, i.e., our desire for materialistic, shallow diversion over civic responsibility. He writes, “It’s only 3-5 minutes of humor that rarely challenges my ideologies and really doesn’t make me think at all. Instead she just makes fun of people for me and says the things I prefer not to say out loud.”2

Mourey’s position of surrogate ranter (where she is more in line with the role of a professional comedian and for which the vexed student fails to acknowledge value) notwithstanding, Mourey’s tirades arguably do engage challenging notions, depending on the viewer.

Whereas many reality shows are implied cautionary tales about how not to live, in complaining about “things that strangers do that piss me off to no end,” Mourey directly instructs viewers in proper (by her definition) behavior. She likely attracts a demographic similar to many reality shows, and in so doing, stealthily inserts her own brand of civic education.

Mourey’s creation is another iteration, along with many of the reality shows discussed by scholars, of an endeavor that promotes an oblique, populist form of public service broadcasting (in contrast to a more traditional, state imposed type from the days of network-only TV), broadly framed as citizenship education via entertainment programming.3 In the case of most reality shows and so, too, with Mourey, earnest education is unintentional but in effect is far more direct (and far reaching) than any conventional education could hope to be. In Mourey’s venue, it is a silver bullet: “If you do [this annoying behavior], you’re a dick.”

While not every Marbles video contains this alternative ethics/etiquette guidance, many do. She vituperates about her noisy neighbor and air travel. She dresses down rude grocery store shoppers, escalator line cutters, people who sing along at movies and plays, and those who “don’t know how to respect barriers” at Chipotle. She suggests that telling such boors to “pipe the fuck down!” will make you “feel a lot better about other peoples’ actions that you can’t control.”

In several instances, Mourey’s rants take on a class battle theme, further removing her brand of citizenship training from the establishment and placing it in the populist camp. In “People I Hate at the Airport,” she says, “Here comes affluent white lady in khaki skirt and pearl necklace with her way too good looking husband and clearly their first and only child all the way to the front of the line [who want to check in because they have a baby] and I’m looking back in line at all of the responsible not asshole families with babies. They got all their fucking diaper bags and strollers and their shit waiting in line. …It doesn’t mean you get to disregard the rules of the fucking airport because you have a fucking child….Meanwhile fucking regular responsible parent over here has three fucking toddlers who are fucking running all around the airport climbing on peoples’ luggage. She doesn’t get to budge the line. Get off your entitled high horse and get in line with everybody else.”

Likewise in “Girls that Piss Me Off,” wherein she rages about women who claim a desire to be treated as equals with men but who want to be taken care of financially, she seethes, “These girls trying on their pearls and khaki skirts and pastel sweaters and polo shirts eating Haagen-Dazs and reading Cosmo while the rest of us are out earning our own money buying our own shit….Unless you can’t work because you just had a baby you should be out working.” And in “How to Trick People into Thinking You’re Rich,” Mourey advocates financial responsibility by sarcastically admonishing those who live beyond their means.

Though not explicitly proclaiming a feminist agenda, she nonetheless erratically endorses one. She addresses female self-esteem, establishing trust and intimacy with her large audience of teen girls, without a hint of preachiness (such a tone would be unlikely to elicit comments like “I love your makeup/boobs.”).4 “What Bitches Wear at the Airport” gives Mourey the opportunity to fume about the time passengers lose to women who wear too much metal while “we all wait for her to go back and forth through the metal detector and then put it back on instead of moving out of the way.” But by saying, “To all the girls out there. Stop dressing like fucking assholes…I hope you’ll fucking listen to me and stop wearing that shit so the rest of us can live,” she is perhaps inculcating a message–despite her own professed dependence on self-tanner and hair products–about deemphasizing superficiality and vanity.

As Laurie Ouellette notes, reality TV ascended concurrently with neoliberal reforms in the 1990s.5 YouTube and other DIY media are a result of a changing media/economic/political landscape and therefore influence and are influenced by definitions of citizenship, personal responsibility, self-expression and media production. Ouellette describes the current rigors of self-government where “…enterprising individuals [must] manage their own health, prosperity, and well being.”6 Mourey is one of the guides that (especially young) citizens may rely on for these tasks.

Excerpts from the analysis of another college student captures the phenomenon of Mourey’s popularity as well: “The topics that Jenna Marbles speaks about and what she says about them seem genuinely true to us. Since she talks about people, and each one of us tries to analyze people and figure people out, we can first of all relate to what she is saying … She has valid points that connect to anyone’s lives…She makes light of uncomfortable situations and this makes us happy…She clearly has faults and is not perfect, but ultimately, she is a great rhetor and we respond to that.”7 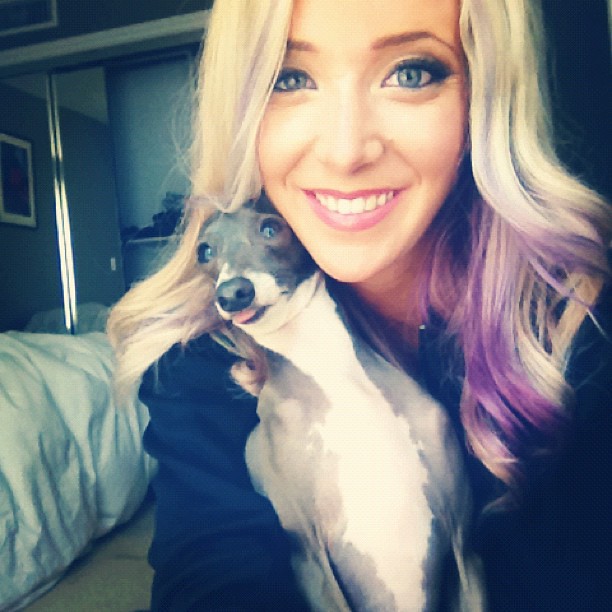 Jenna and “Kermit,” her Italian Greyhound

Instead of an institutional authority bearing instructional stipulations, Marbles’ authority arises not from her MA in psychology, not from a constructive model of virtue, (to wit, the above-mentioned webisode titles), but from her authenticity. The intimacy of the one-to-many video format and addressing viewers as “friends that like to bitch about things that make you angry in the world” creates a potent parasocial relationship, i.e., the feeling that Jenna is a real friend. She exhibits problem-solving and shares life lessons with a rapt and impressionable crowd.

Such coaching is evidently borne from a subjective place, as Mourey shares her honest feelings of alienation, loneliness and lack of direction. “You have to be confused in life,” she counsels, “or else you won’t grow.” Such unfettered confession and the subsequent salve she admits to experiencing from the support of millions of strangers both advances the young generation’s confessional, no-privacy mode but also models how to derive support from a community.

Unlike traditional public service, as Ouellette writes, “…reality TV’s civic aims are also diffuse, dispersed, commercial…and far removed from any direct association with official government policies or agendas.”8 At one point in the not too distant past we might have been able to claim such an unmediated, unedited project on a democratic platform like YouTube as blissfully far from established media environments as well, though corporate interference in the guise of Google and others is now at hand. Nevertheless, Mourey is an apt example, wittingly or otherwise, of (especially middle class) citizens taking matters into their own hands. As a testament to this alternative form of self-governing, Mourey’s project, aided by capitalism and relatively new revenue models, has earned her exponentially more money than a standard workforce job would.