Continuing (and concluding, as far as my Flow appearance goes) my concern with how industry forces directly shape the quality and availability of games in particular and game culture in general, I move on from the role of aggregators of criticism like Metacritic and GameRankings, and from real-money trade and secondary markets for games to the role of in-game advertising. As in my two previous Flow columns, I emphasize transaction costs – in the teeth of myths about frictionless digital distribution. 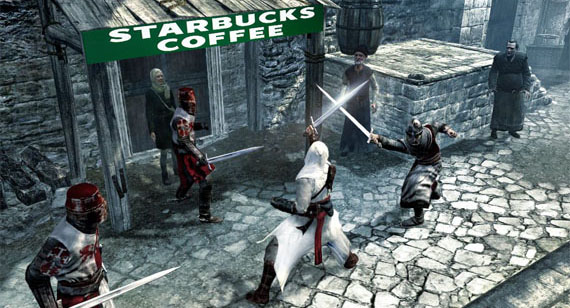 Contemporary computing culture is changing under the influence of mobile gaming trends, and as game developers seek new markets – not just for Facebook games or mobile games that are cheaper to develop, but also in large-scale games for thousands or even millions of online players. While developers like PopCap, Zynga, and Playdom distribute casual games as apps for mobile devices or via portals such as Pogo, Yahoo Games, Bebo, or WildTangent, the low price threshold and short attention spans of casual gaming have not approached the profitability promised by popular synthetic worlds in the massively multiplayer online segment. Before launching its own site early in 2012, Zynga got more than 90 percent of its revenue from Facebook, and Facebook got 12 percent of its revenue from Zynga. Even as some test the limits of the ‘freemium’ model, the majority of ambitious developers and publishers stake their hopes on the purported magic bullet: advertising.

Most media are supported by advertising, so it was always just a matter of time until ads make their way into the game industry. Now what you play, how you play, and how you react to in-game stimuli is changing the game industry. The more consumers expect to consume information or entertainment “for free”, the more the hidden costs rise—to the point where some even argue that the history of information is the history of advertising. The 2008 Obama campaign ad in Burnout Paradise got a lot of attention, Zynga experiments with unskippable videos, and mobile games appear to be a natural venue for discount offers or ads for other apps. SONY recently filed a patent that would pause games to show ads, PriceWaterhouseCoopers predicts a compound annual growth rate of 13% for in-game ads while IBM anticipates up to 19%, and industry estimates of the current size of that market range from $500 million to over $2 billion. 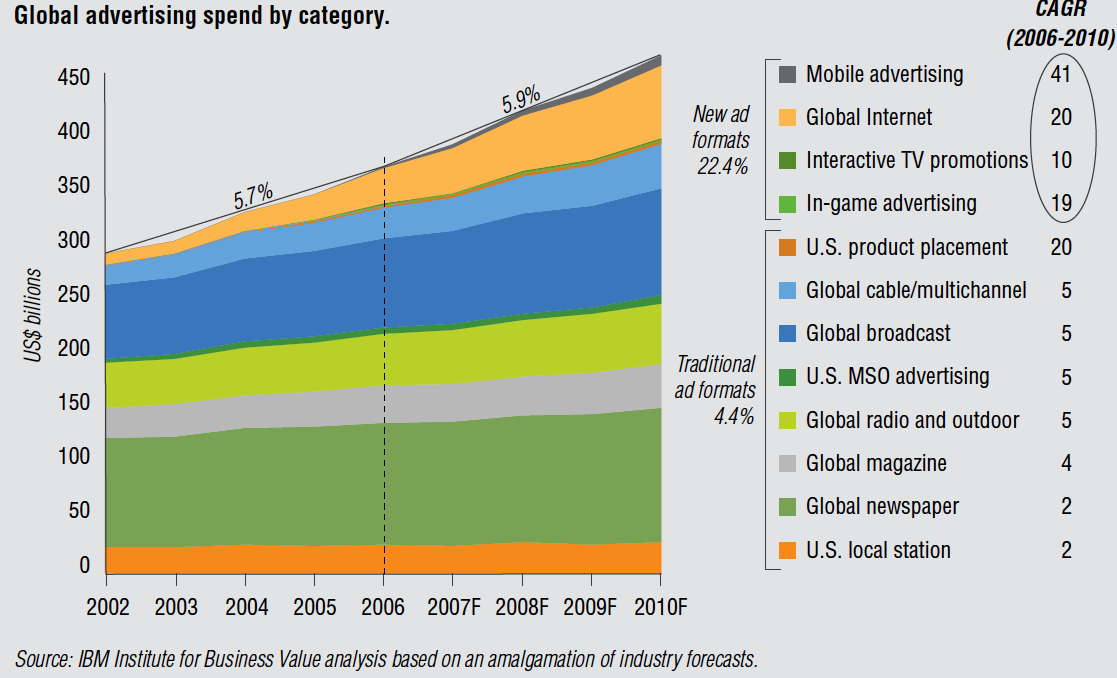 It is an axiom of media economics that one observes a double market – an exchange of wares as well as the package and sale of attention. Technical infrastructure enables the creation of “content” to be distributed to buyers, but what is consumed is not only film, music, or computer games, but also attention. One might say the supply and demand of product and attention flow in opposite directions. Information can be packaged and be sold without being scarce or used up by that process; digital media bring a highly segmented and fragmented audience in contact with suppliers of content and distraction. While it is true that attention is limited, for media economics it is just as relevant that consumption of a film or a game does not use them up—they remain available for further circulation. Entertainment shows a growth rate that quantitatively as well as qualitatively exceeds that of attention: with each year, more music, film, and software becomes available, although the collective attention of the audience has not grown proportionally. When it was not easy to launch a new newspaper, a new television network or radio station, this meant a supply limit in the shape of barriers to entry; canonical examples are the vertically integrated Hollywood studios of the fifties and the sixties. In traditional mass media, distribution is limited by infrastructure, sales expenses and production costs, while attention seems relatively cheap. TV advertising in the US in 1982 took up 6 minutes per hour, but by 2001 it had grown to 12 minutes per hour, and recently, an hour’s broadcast in the US encompasses 12 minutes of national and 4 minutes of local advertising; much the same trend applies to radio, newspapers, and magazines. For these investments in attention it is relatively insignificant to distinguish between advertising time and advertising expenditures; as long as marketers find it plausible to invest in advertising rather than production quality or infrastructure, advertising budgets rise. Now that computer time rivals or exceeds TV time, advertisers are expected to flood in. For entertainment software, this has meant that attention is no factor in the creation of quality product, as long as it is cheaper to buy advertising than to invest more in game design.

One may wish for a market where quality translates into popularity, but mass media exhibit a rather loose coupling of production quality with market success, modulated by increased advertising expenditures. Although a film can be sold in cinemas, on DVD, on television, abroad, and in merchandising of toys, books, posters, T-shirts etc., film production has become increasingly dependent on the blockbuster effect, just the music industry depends on hits. Over the past 20 years, the computer game industry has increasingly emulated that model. However, the higher advertising expenditures spiral, the less of the budget will remain for quality production; thus either the investment in production must rise overall, or quality will suffer.

With the transition to digital distribution, the widely hyped assumption was that the cost of attention, not production cost, would dominate as new technologies try to lower the cost of production and distribution. Nonetheless it remains questionable that popularity under the conditions of new media will show a direct correlation with quality. Indeed, despite all the hype about frictionless markets and zero-cost distribution online, games are one cultural arena where industry studies can easily demonstrate how the market is not once and for all transformed by going online. If buyers and sellers are to find each other, there are still substantial search costs in increasingly diverse markets, information costs include but are not limited to privacy concerns for instance, and policing or enforcement costs that reassure participants that deals are trustworthy. While some neoliberal observers of net commerce celebrate how contracts trump other legal frames of online interaction, gamer communities (or fan groups, or audiences otherwise defined) are not assured that their interests are represented. Sure, search costs are lowered if one does not consider the trade-offs lurking in targeted advertising that frames individual, rather than generic, search results. Yes, websites can steer gamers’ attention towards walk-throughs, cheats, machinima collections, or other things of interest in gamer culture, but again only within the scope of what EULA and TOU permit, and that information is often obscured. My last column offered some observations about policing costs in WoW, but here I am most interested in whether advertising could in fact support a healthy gaming ecology. 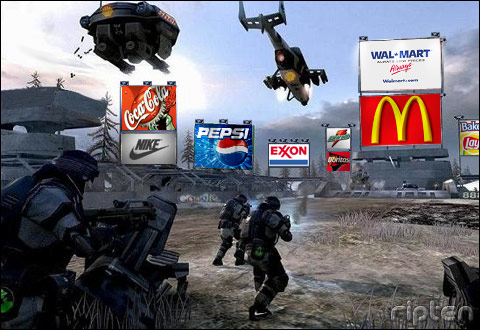 When Google acquired in-game ad server AdScape in 2007 for $23 million, it promised to share revenues with developers and publishers. The target market was casual game makers who would allow for video, text, and display ads. The Yankee Group estimated the scope of the in-game ad market would grow from $78 million in 2006 to $971 million by 2011, becoming gradually more mainstream in consoles. However, actual growth has been far slower—for a number of reasons. Microsoft, for instance, has few incentives to allow Google into its ecosystem. A digital dashboard was supposed to allow advertisers to buy and measure their placements across multiple media, including games, TV, radio, and billboards. Banks estimate that this approach might attract significant spending, but IBM at the same turn predicted “the end of advertising as we know it.” Furthermore, buyers might worry about conflicts of interest that arise between purchases of owned inventory versus partner ads—picture Amazon, Google, or Microsoft in this role, and speculate whom you might trust the most to be unbiased when it comes to their own product placements and ads, and why. Moreover, bigger advertisers who are advantaged in the old system due to pricing power might push back against a system that could give equal access to smaller advertisers. And if the metrics show a lower return on ad dollars for in-game ads, few buyers would want to bundle that into their campaigns. Proponents of in-game ads calculate that if 200 million US gamers play an average of 13 hours per week, then companies like SocialVibe, Flurry, WildTangent, or SponsorPay should exploit this fast-growing niche for banner ads, videos, and product placement. Critics point out, however, that tests for games including Gran Turismo 3, NBA Live, and Project Gotham Racing 3 yielded low recall and recognition for in-game ads, and little or no engagement using eye-tracking and other behavior monitoring. 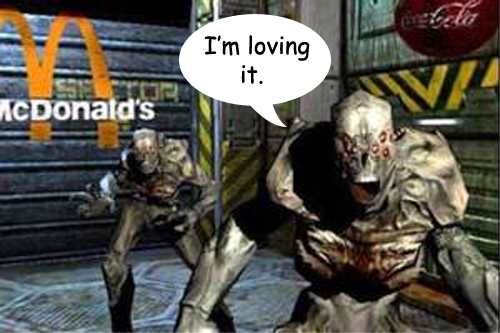