“Who Gon Check Me Boo”: Reality TV as a Haven For Black Women’s Affect
Kristen Warner / University of Alabama 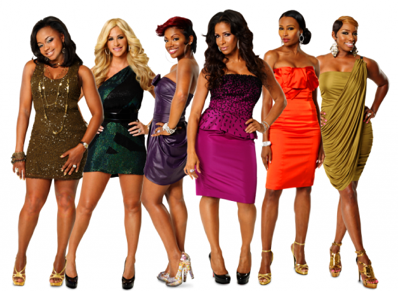 A few years ago I attended a conference panel during which a panelist was discussing Bravo’s The Real Housewives franchise. All was well as we listened to the speaker discuss the plots surrounding each of the show’s casts and how these spoke to larger issues of Bravo’s programming strategies.
That is, all was well until someone from the audience asked what the speaker’s thoughts were about Real Housewives of Atlanta (RHOA). Without thought (or malice), the panelist quickly responded, “I don’t watch that show.” While others laughed, I was inwardly infuriated because, honestly, in a franchise based on ridiculous women behaving badly, how can one distinguish which cast is the worst? All of the women in each cast need come to Jesus moments where they can deal with the way they behave on the shows.

But then I began to think about how similar distinctions were made between ABC’s The Bachelor and VH1’s Flavor of Love. The former program was considered the more quality version of the two. In terms of production values, yes, this may have been true. But with regard to content and tone, the shows are pretty much the same. In fact, I have argued in the past that Flavor of Love is a more honest depiction of women vying for a man than The Bachelor could ever be. For example, rather than the passive aggressive exchanges The Bachelor‘s [white] female contestants made toward each other, Flavor‘s contestants would openly exchange words and often have physical altercations. In addition, my favorite example occurs during the second season finale when Flav chooses Delishus over New York (who had been rejected in the first season as well and was brought back to raise the stakes). Rather than imitating The Bachelor style that encompassed bringing each contestant to the beau’s location and finding out individually if they would be given an engagement ring or not, Flavor had both women together stand before Flav as he chose who he wanted to give his gold grill (yes, the gold teeth) to. As would be expected, there were tears when Delishus was chosen over New York but there was also profanity and the acknowledgement that her emotions had been played with despite her signing on to do this project (again). Delishus even began to take her shoes off in preparation for fisticuffs.

While it would be easy to fall back into a positive/negative representation binary here, I believe that line of argumentation disallows productive conversations surrounding the lessons that Flavor can teach us about The Bachelor. The largest lesson of all being that Flavor embodied the instability of whiteness through its many ruptures in ideologies of marriage, of capitalist consumption, and of femininity.

Returning to the RHOA story, I think that part of the reason the panelist responded in such a way to her question was based on a similar rationale as the dislike for Flavor of Love. The logic that while The Bachelor is trashy, Flavor is worse also seems to apply when making distinctions between RHOA and all the other Housewives casts. And, as with the Flavor example, there are lessons that can be learned from RHOA.

In addition, I must restate that the shows under the Real Housewives brand are not that distinct in tone, content or format. Yet, for all the foolywang that the women in Orange County and New Jersey and New York and Beverly Hills get up to, there is something that just strikes too hard about the ladies of Atlanta. New Jersey‘s Theresa may have turned over a table and may have grabbed some of Danielle’s hair but it was Atlanta‘s Sheree who put her hands on and turned Kim’s wig.

New York‘s Countess may be “Chic C’est La Vie” but it was Atlanta‘s Kim who started the franchise’s singing career with the first (country and western version) of “Tardy for the Party.”

In short, the ways the workings of whiteness are allowed to remain invisible with every cast except for Atlanta, wherein its performance is always on display through the illustrations of the women purchasing accoutrements and acting in ways that they assume are the behaviors and attitudes of individuals with wealth, do in fact make this show different from its counterparts and renders it unstable. And the instability of whiteness is why Atlanta‘s space is at once too much racialized spectacle and not enough post-racial reality (read: the types in play speak too much to the clichéd representations of black women as loud, brash, sassy, and angry) for mass audiences socialized to not “see” race and be comfortable.

Put simply, the show is just too black.

This point leads me to the crux of this piece: what are the unspoken boundaries of acceptable re-presentable blackness and for whom are these boundaries set? While the types of blackness embodied in RHOA are a part of the same packing structure as the other Housewives brands, these representations resonate with my own experience as a black woman and allow me identification and validation. The paradox of too much and not enough is an impasse that is familiar with respect to my daily dealings with race and have to negotiate: just like this series. The good news is that not only is this negotiation happening on RHOA or Flavor of Love but in other shows like Let’s Talk about Pep, The Basketball Wives, and Braxton Family Values. 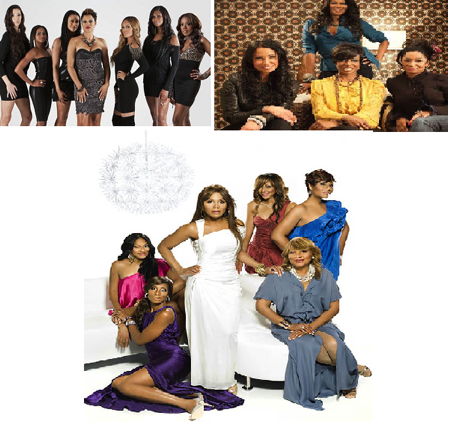 The depictions of black femininity in these non-scripted reality programs gives many of us women of color a connection to something familiar, or as Lauren Berlant describes it, an “intimate public sphere” where:

Whether linked to women or other nondominant people, it flourishes as a porous, affective scene of identification among strangers that promises a certain experience of belonging and provides a complex of consolation, confirmation, discipline, and discussion about how to live as an x. The intimate public provides anchors for realistic, critical assessment of the way things are and provides material that forments enduring, resisting, overcoming, and enjoying becoming an x.1

In this sense, black womanhood on television is the “x” that allows a space for women of color to congregate and discuss the rightness or the absurdity of how these women live their lives similar to how we live ours. These programs organize social belonging through the tenets Berlant mentions. We, for example, can discipline Royce from Basketball Wives for wearing cutoff shorts and tube socks to a luxury car dealership; similarly, we can chastise Meeka for “talking out of both sides of her mouth,” that is, aligning herself with both groups of friends on Basketball Wives and are thus unsurprised when Tami pops her in the mouth.

As ridiculous as it is, we commiserate with Jennifer at her divorce party as she stabs the symbolic cake representation of her ex-husband’s phallus and are angered when he throws a drink in her face .

The final scene in the season finale of Basketball Wives

Put simply, the ways that black women engage within these texts does cross the boundaries of acceptability and it certainly does position itself in-between the paradox of too much and not enough but it also presents an image of black femininity that is not often allowed televisually, enabling women of color to endure and to enjoy who they are without the bounds of whiteness.

A final point: the title of this article is a quote from RHOA‘s Sheree and speaks to many of the negotiations discussed—the balance of whiteness versus codes of blackness as well as the role of racialized spectacle. Mostly though, the phrase connects to an affective response—anger, in this instance—that serves to put in check those who would dare silence her. I think it is a fitting response to those uncomfortable with these depictions of black femininity.