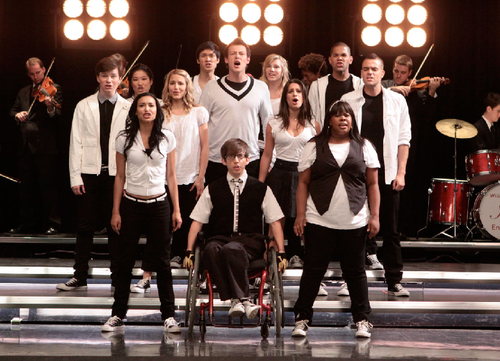 Before I explain why Fox’s musical comedy-drama Glee often feels uneven, I’d like to point out what the show gets right. Principally, Glee‘s creator, Ryan Murphy (Nip/Tuck), has adopted the most suitable musical subgenre for his project: the show musical.1 Of the subgenres — fairy tale, folk, and show — the show musical, whose numbers typically perform a purpose (e.g., auditions, rehearsals, performances), best caters to Murphy’s objective that the cast doesn’t “suddenly burst into song.”2 When the characters sing, Murphy claims, they will do so only when they are on stage practicing or performing, in the rehearsal classroom, or in a fantasy state (i.e., a performance in their head). Limiting the numbers to these situations, he believes, will make Glee “more accessible to people.”3

Glee may have assumed the best musical subgenre for its purpose, but the show doesn’t always thrive within said subgenre. And people notice. For example, reviews of the first season swing frantically back and forth, from the show is “so funny, so bulging with vibrant characters” and “these performances are wonderful, […] shaping a fully realized world” to this is “wildly incoherent” and “simply a mess.” Much of this unevenness, I believe, boils down to Murphy’s refusal to implement consistently one of the most important structural conventions of the musical genre: paired segments, evenly spaced thematic and/or sexual comparisons/oppositions underscored via setting, shot selection, music, dance, and personal style.4 As Rick Altman explains, with musicals the viewer must “forget familiar notions of plot, psychological motivation, and causal relationships” and surrender instead to “simultaneity and similarity” (e.g., male/female, talented/inept, teacher/student, gay/straight, popular/ostracized).5 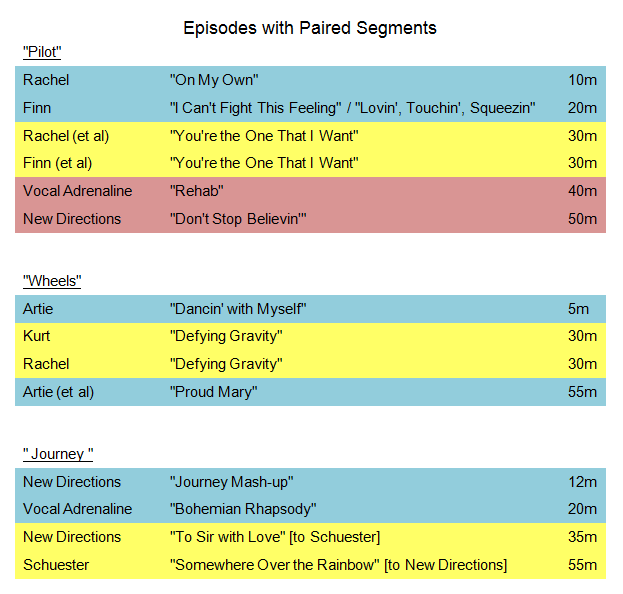 Not all that colorful, but at least consistent.

At least three episodes of Glee feature uniform parallel segments: “Pilot,” “Wheels,” and “Journey.” Significantly, these episodes are also the most highly praised of the season.6 Unlike those which critics have panned or are divided over (e.g., “Hairography,” “Once Upon A Mattress,” “Home,” “Funk“), these three carefully and consistently juxtapose individual characters and groups. For example, “Wheels” begins and ends with Artie (Kevin McHale) dancing in the school’s auditorium, first by himself and then with his friends in the glee club. Likewise, “Journey” contrasts the vocal and dance abilities of New Directions with that of its show-choir nemesis, Vocal Adrenaline, and then closes with another parallel segment: New Directions singing to their teacher/mentor, Mr. Schuester (Matthew Morrison) and Schuester returning the favor to his students (see table above). Through these parallel numbers, the characters develop and the viewer understands their growth.7 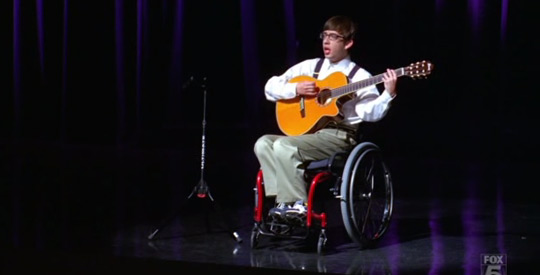 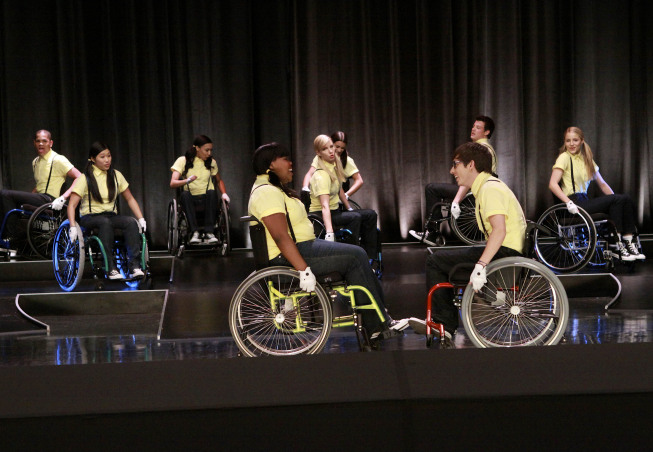 Artie initially “dancing by himself” and then “proudly” with New Directions.

What’s more, the musical numbers in these three episodes are limited (unlike those in “The Power of Madonna,” for instance) and spread evenly throughout. For example, like its show-musical predecessors Singin’ in the Rain (Stanley Donen and Gene Kelly, 1952) and The Band Wagon (Vincente Minnelli, 1953), Glee‘s “Pilot” features a song about every 10 minutes; moreover, “Wheels” positions its songs in a nearly perfect arc: one at the beginning, middle, and end. Finally, each of the numbers in these episodes serves a convincing purpose. For instance, in “Pilot,” Rachel (Lea Michele) auditions for glee club with “On My Own,” effectively informing the viewer she is both passionate about Broadway musicals and isolated in high school. Echoing this number, Finn (Cory Monteith) sings REO Speedwagon’s “I Can’t Fight This Feeling,” conveying to us that although glee club isn’t traditionally for football players, he won’t be able to “fight the feeling” to join. 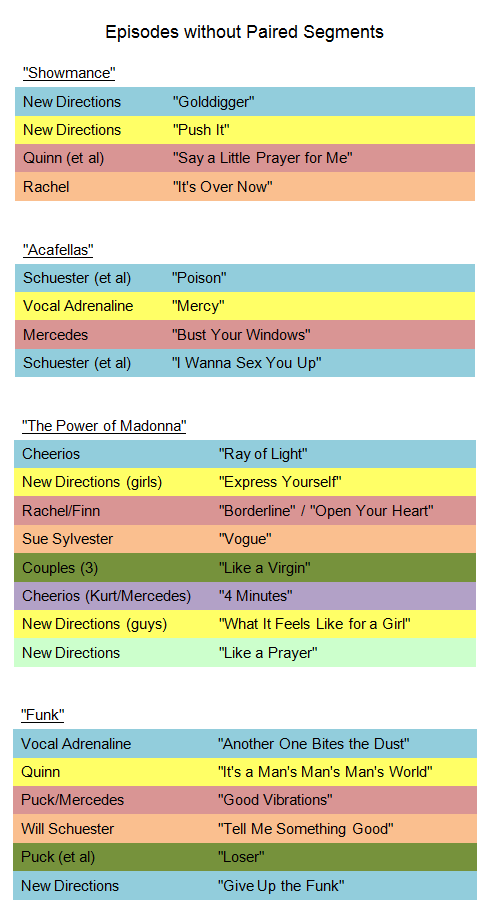 While “Pilot,” “Wheels,” and “Journey” achieve narrative and stylistic continuity via paired segments and purposeful performances, a large number of Glee‘s episodes do not. As a result, the entire series can feel unbalanced, schizophrenic even. For example, the majority of the musical numbers in “Showmance,” “Acafellas,” “The Power of Madonna,” and “Funk” may individually charm and/or entertain the viewer, but because they are detached from one another, they fail to form a coherent whole (see table above). Admittedly, Sue Sylvester’s (Jane Lynch) copycat performance of Madonna’s “Vogue” is interesting and ambitious, but it has no corresponding number; hence, we do not fully understand what purpose it serves. The same goes for Schuester’s weird flirtation with Sue (“Tell Me Something Good”), Rachel’s cries over her love for Finn (“Take a Bow”), and Mercedes’s (Amber Riley) fiery reaction to Kurt’s (Chris Colfer) rejection of her (“Bust Your Windows”). Had Ryan Murphy et al created musical numbers through which Sue, Finn, and Kurt could reciprocate their feelings, rather than using snippets of dialogue or in some cases silence, these episodes would likely feel more complete. In this genre, reacting to such emotional performances via dialogue alone generally doesn’t cut it.8

In interviews, Murphy claims that with Glee he is creating a “postmodern musical” in the vein of Chicago (Rob Marshall, 2002) or Moulin Rouge (Baz Luhrmann, 2001). But what he ostensibly fails to realize is that these two films — while perhaps modern in look, themes, and style (editing in particular) — still conform to the structure of classical musicals, operating almost exclusively through doubling or paired segments.9 Furthermore, Murphy admits that he bases Glee‘s musical numbers on “stuff that I like and that I think fits the characters and moves the story along.” On its surface this is perhaps fine, but since musical narratives — like all genres, television shows included — necessitate structure, that “stuff that Murphy likes” needs to be framed more consistently within matched scenes and sequences. Perhaps then Glee wouldn’t feel so uneven.