Where the Boys Are: Postfeminism and the New Single Man

John: Do you ever think we’re being — I don’t want to say sleazy ’cause that’s not the right word, but a little irresponsible? Jeremy: No! One day you’ll look back on all this and laugh. And say we were young and stupid. A couple of dumb kids running around. . . John: We’re not that young. – Wedding Crashers (2005)

Postfeminist representational culture is preoccupied with distinctions of age and generation and it is adept at searching out and “rehabilitating” those who don’t fit its heteronormative, consumerist, domestic script. While in this respect its most frequent target has been the single woman, recent popular culture reflects an increasing interest in the single man. In a (perverse) spirit of gender egalitarianism, deficient/dysfunctional single femininity is now increasingly matched by deficient/dysfunctional single masculinity in a number of high-profile films and television series.

A cluster of 2005 and 2006 films (The 40-Year-Old Virgin, Wedding Crashers, Failure to Launch and the upcoming Mama’s Boy and You, Me and Dupree) stage anxiety about the uncoupled thirty or fortysomething male and his failure to take up his proper role in the social order. In Failure to Launch Tripp (Matthew McConaughey), a 35-year-old still living (and entertaining) at home, is the subject of an attempt by his parents to dislodge him. They hire Paula (Sarah Jessica Parker) a “professional interventionist” who fakes a romance with Tripp but winds up falling for him. The film’s device for staging Tripp’s “unnatural” state is a series of hostile encounters with animals in scenes of outdoor leisure. He is attacked by a chipmunk while biking, a dolphin while surfing and finally a lizard while rockclimbing. For those viewers who miss the point, Tripp’s predicament is pithily diagnosed by his friend who tells him, “Your life is fundamentally at odds with the natural world. Nature rejects you.” 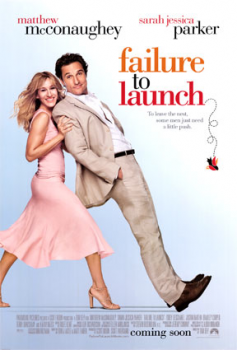 Similar preoccupations with bachelorhood structure this season’s Modern Men (WB), Four Kings (NBC) and the upcoming What About Brian (ABC) on television. Meanwhile the entry for Failure to Launch on the Internet Movie Database includes a thread of 157 posted responses in response to an initial testimonial entitled “I Still Live at Home and I Like It!” (Ensuing debate ranged widely from the comparative costs of establishing financial autonomy in different regions of the country, to the gender norms that would seem to penalize men more heavily for living with their parents in adulthood, to the nature of “meaningful” work and compensation.)

Media fictions like these (and debates about them) play out against a backdrop of intermittent media panic about male achievement (a flurry of press coverage in recent months drew attention to the fact that women now outnumber men students at many universities) and the publication of new polemics in defense of the naturalness of patriarchy (Philip Longman’s “The Return of Patriarchy” in this month’s Foreign Policy) and the value of manliness (Harvey Mansfield’s book Manliness). The fear that the single man is not taking up his proper place in the domestic order has accompanied a re-positioning of the single woman that entails a certain ambivalent celebration of some such women “taking responsibility” (always a virtue in the society of managed selves) for their own procreative and economic status. The financially secure new single woman has been widely profiled including in USA Today‘s Valentine’s Day publication of “Dream House, Sans Spouse” a feature on the rising rates of female home ownership. According to the article, single women not only comprise one-fifth of all home buyers, they also buy at double the rate of single men (a striking departure from homeowning statistics in 1981). Two weeks ago in a cover story unfortunately titled “Looking for Mr. Good Sperm,” The New York Times Magazine addressed the phenomenon of single professional women buying sperm and managing conceptions on their own before losing fertility. In a quintessentially postfeminist scenario women are now often seen to be equally as or more adept than men at transitioning to an environment in which intimacy is fully commercially transactable.

The single man represents a compound problem and his offense registers at both a familial and an economic level. Not only does the stay-at-home single man spoil the scene of approved intergenerational domesticity, he is also likely to be marginally employed and/or an economic “poacher.” Wedding Crashers‘ Jeremy (Vince Vaughn) and John (Owen Wilson) illicitly take part in the bridal economy, bringing sham gifts and enthusiastically consuming the catering in their bid to meet women for sex. In Failure to Launch Tripp “treats” Paula to lunch on a client’s boat he tries to pass off as his own. In You, Me and Dupree a newly-married man’s friend (Wilson again) becomes a long-term houseguest after he takes time off from work to attend the wedding and is fired as a result. The single man living at home has not set up his own household and he does not dedicate himself to the economic provision of others. Even Wedding Crashers‘ Jeremy and John are repulsed by Chazz (Will Ferrell) the “innovator” whose social model they have ascribed to, when they discover he lives with his mother and has moved on to preying upon grieving women at funerals.

The emergent “problem” single man offers an opportunity to think about the nature and function of postfeminist masculinities in current popular culture. Any such consideration should bear in mind the way this figure works to obfuscate the ideological agenda behind the current cultural celebration of women who return home either as chastened former professional women, divorced women, single mothers or carers for elderly parents. The single man’s (relative) dependency puts him in the position of usurping the retreatist postfeminist woman and in their desire to expel the single man from the scene of the family home these fictions tend to reinforce its appropriateness for women. In unlocking the single man from his “unnatural” state these films also make him a promise: that he will not have to forego bachelor pleasures upon the achievement of economic independence and exogamous emotional commitment. There, is after all, no justification for languishing in arrested development when bachelorhood prerogatives now extend past bachelorhood into commitment and marriage. In the era of the “gentleman’s club,” the bachelor party vacation, and the friendship group vacation where partners stay home such recreational prerogatives are extended far past youth. At the conclusion of Wedding Crashers the newly formed couples of Jeremy and Gloria and John and Claire happily drive off to crash a wedding together.